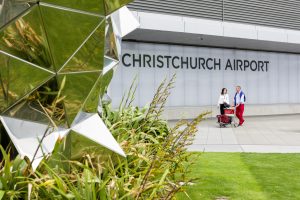 Christchurch, New Zealand, 2016-Sep-12 — /Travel PR News/ — Christchurch Airport set an all-time record of 6.3 million passengers for financial year 2016 (FY16) through servicing the South Island tourism market,  and in doing so pumped more than $180 million in new GDP into the regions of the South Island and generated a record $31 million in dividends for shareholders.

Airline seat availability grew seven per cent during the year to 7.9 million, with several new services starting midway through the year. International passengers using the trans-Tasman network grew seven per cent and long-haul grew 18%. The airport handled 29,000 tonnes of international air freight, up four per cent on the previous year.

“We have also continued development of our bare land to lift revenues, grow shareholder value, increase dividends, and balance risk associated with what can be a dynamic aviation industry”, says Mr Mackenzie.

During FY16 the airport company completed and opened Spitfire Square, its new convenience retail complex, and opened Mustang Park, its new tourism transport hub. It currently has $168 million of new investment property development underway, which will begin generating additional income in FY17 and FY18. This includes the South Island Freight Hub, being developed with Freightways and Courier Post; the 240 bed JUCY Snooze pod hostel, the first in New Zealand, due to open October 2016; the 200 room Novotel Christchurch Airport due to open December 2017.

Mr Mackenzie says “The Board is encouraged by the improving overall financial performance of the business and on-going growth in returns to shareholders.”

Dividends have lifted from $7.6 million in FY14 to $31 million in FY16. The increased dividends were driven not only by growth in profitability (NPAT was $16 million in FY14) but also the Board increasing its dividend pay-out, from 60% of NPAT (excluding revaluations on investment properties) to 90% from FY16.

“The business has grown, developed strategically and built greater resilience in recent years, plus the outlook is positive – all of which gave the Board confidence to lift on-going dividend pay-outs to 90%”, says Mr Mackenzie.

Airport Chief Executive Malcolm Johns expects continued growth in passenger numbers in the next year, to be in a range of 6.6 – 6.7 million for FY17, with trans-Tasman airline capacity forecast to increase by around 15% and international long-haul capacity by around 20%.

“We have also seen domestic airline capacity reach record levels, with Air New Zealand adding additional services between Auckland and Christchurch and also to the regions.

“On the Tasman, Qantas is offering new services from Brisbane, Sydney and Melbourne, to tap into the South Island market growth and feed visitors and residents between the South Island, Asia and Europe through their Australian east coast air service networks. This means Qantas’s international capacity will double at Christchurch over the coming year.

“Long-haul we have worked with China Southern Airlines to establish direct services with Mainland China, with Air New Zealand to introduce the 787 on Perth, and Asiana Airlines to test the market with a new direct service to Korea this summer.

“Our focus over the past two years has been to build strategic partnerships that increase our connectivity to the big airport hubs – Sydney, Brisbane, Melbourne, Auckland, Singapore, Guangzhou, Taipei, Seoul and Dubai – which collectively handle more than 200 million passengers a year.
“We intend to keep building a stronger business through continued aeronautical growth and land development, and to keep investing in our customer experience, safety and sustainability, to support our city’s recovery and contribute to the social and economic outcomes of the South Island and New Zealand, with continued focus on lifting shareholder returns”, Mr Johns says.

It is the busiest and most strategic southern air connection to the world’s trade and tourism markets, having welcomed almost six million passengers in the past year.

The airport is a major driver of the South Island regional economy, with some 6000 personnel working on the airport campus making it the largest site of employment in the South Island. It is one of the partners in the “South” initiative, which sees all 15 regional tourism organisations working collegially to promote the South Island.

Christchurch Airport’s new integrated terminal was completed in April 2013 and is a factor in the airport consistently being rated by an independent international quarterly travellers’ survey as the best airport in Australia and New Zealand.