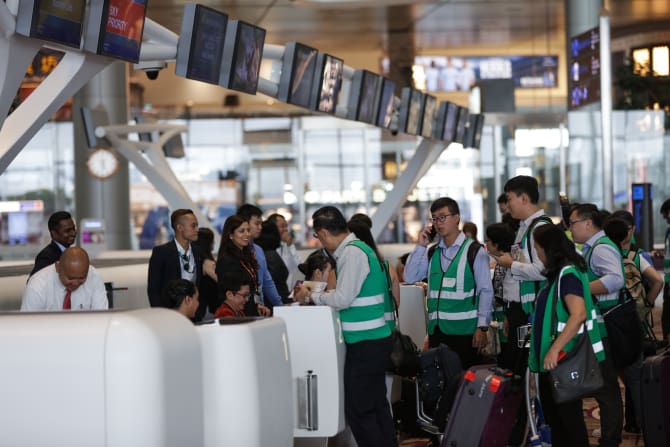 Preparations in order, 3,000 airport staff will work at T

SINGAPORE, 2017-Oct-26 — /Travel PR News/ — Changi Airport Group (CAG) today conducted its full-dress rehearsal for operations at Terminal 4 (T4), as it prepared to commence operations at the terminal on 31 October 2017.

Since October 2016, operational readiness trials, training sessions and workshops have been held to train and prepare airport staff who will be working at T4. Today’s rehearsal involved about 1,500 airport staff, tenants and participants, and included final systems checks and tests by airlines, commercial tenants, ground handling companies and other airport partners. A fire evacuation exercise, as well as the transfer of assets and equipment, was also carried out.

Some 3,000 staff from the airport community will work at T4, once all nine airlines[1] have moved in. As part of the design of T4, staff-centric amenities have been incorporated in the terminal for a more conducive working environment for the airport community. These include ergonomically-designed work stations, dumbwaiters[2] at aircraft stands, and staff lounges.

T4 has undergone all inspections and audits by relevant agencies. It received its Temporary Occupation Permit (TOP) in December 2016. The two-storey building has also been accorded the Green Mark Gold Plus and Universal Accessibility awards by the Building & Construction Authority.

To ensure that staff working in the terminal are familiar with fire safety measures, eight fire drills involving over 7,800 participants have been conducted at the terminal. CAG has also tested all fire systems (e.g. alarms and sprinklers) as part of its preparations for T4’s opening. The terminal is designed with a full suite of fire detection and protection measures, such as smoke control and exhaust systems, emergency communication systems, as well as fire hydrants for the main terminal building and adjacent ancillary buildings.

The Singapore Civil Defence Force has assessed T4 to be fit and safe for occupancy. CAG has also taken additional measures and sent samples of the cladding used on T4’s external walls (comprising Alubond and Alpolic brands) for laboratory testing as added prudence, given recent concerns over Alubond composite panels. The Alubond samples have been tested to be compliant with the requirements in the Fire Code, while results of the test of the Alpolic samples will only be known in a few months’ time, as the test can only be conducted overseas.

Mr Tan Lye Teck, CAG’s Executive Vice President, Airport Management, said, “We are pleased to share that all preparations are in place for T4 to commence operations on 31 October. We would like to extend our deep appreciation to our airline and airport partners and to the Changi community for their steadfast partnership in this journey. We look forward to welcoming our first passengers to T4 next week.”

To ensure a smooth transition of flight operations, the nine T4 airlines will shift their operations to T4 progressively over one week on the following dates:

More information on T4 is available at T4.changiairport.com

[2] A small freight lift used to transport items such as wheelchairs and strollers at the apron area.

Changi Airport is the world’s sixth busiest airport for international traffic.It served a record 58.7 million passengers from around the globe in 2016. Including the soon-to-be-opened Terminal 4, Changi Airport will have 400 retail and service stores, as well as 140 F&B outlets. With over 100 airlines providing connectivity to 380 cities worldwide, Changi Airport handles about 7,000 flights every week, or about one every 90 seconds.