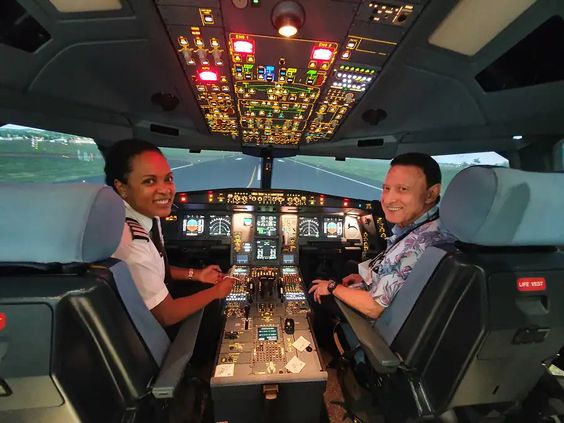 Nadi, Fiji, 2021-Nov-04 — /Travel PR News/ — Fiji Airways has announced the promotion of its first ever female to command a widebody aircraft. Captain Seini Koroitamana Cornish has progressed as a Fiji Airways A330 aircraft Captain, becoming the first female in the National Airline’s 70-year history to do so.

Captain Koroitamana Cornish was both excited and humbled at this achievement: “Achieving the command position on the A330 is really just the beginning of this new journey. I look forward to the challenges that come with commanding a wide-body aircraft.”

Captain Koroitamana Cornish thanked her family for their support. She also paid tribute to her late father, the late Mr Jone Koroitamana, who was a former CEO of the Civil Aviation Authority of Fiji CAAF: “My father naturally was my biggest inspiration because of his aviation background, experience and understanding. My mother provided the much-needed push in my early years. She is a wise and strong woman whose strength and guiding hand has always inspired our family to push through life’s challenges. And as the youngest in my family, my older siblings have been my greatest support in my journey.”

Fiji Airways Managing Director and CEO, Mr Andre Viljoen congratulated Captain Koroitamana Cornish on her accomplishment: “This is a proud day for all of us at Fiji Airways. Progressing any Fijian into a command position of any aircraft is special, but having our first female Captain of a widebody aircraft is historic and remarkable. Captain Seini Koroitamana Cornish’s promotion to A330 command is a trailblazing achievement for women in aviation, not just in Fiji but the South Pacific as well. Already a highly accomplished pilot, Captain Seini continues to shatter the glass ceiling.”

Mr Viljoen added: “We’re able to progress qualification and training of our highly capable Fijian pilots right here at home because the Full Flight Simulators and facilities at the Fiji Airways Aviation Academy. Without the Academy and its Simulators, we would have to send Seini and other pilots abroad, which would be logistically next to impossible given the border restrictions in place. We are obviously delighted that the Academy is already contributing to milestone achievements like this one for Captain Koroitamana Cornish. What a statement for gender equality and what a great message! It’s a momentous occasion.”

Fiji Airways Chief Pilot and Executive Manager Flight Operations, Captain Aaron Dean said: “This is just reward for Captain Koroitamana Cornish’s perseverance. She has rose through the ranks as a First Officer on the narrowbody aircraft and now becomes our first widebody aircraft captain. She has most definitely earned it. We can provide all the training and all the opportunities but ultimately it’s up to the individual on how to they take those opportunities.”