Freight transport continues to rise, with a 7.3% growth on last year

Passengers
In the month of October, 2,119,423 passengers visited Brussels Airport, a growth of 6.4% compared with October 2014. The number of transfer passengers, in particular, grew strongly: up 14.5% on the same period last year, thanks to the strong performance of Brussels Airlines and other Star Alliance partners.

The growth is seen in every segment. Growth in the short-haul segment was driven mainly by Brussels Airlines and the low-cost companies, while in the long-haul segment all airlines performed well. Since 25 October, the Japanese company All Nippon Airways has been contributing to this growth, with a daily flight to Tokyo.

Cargo
The freight volume at Brussels Airport rose in the month of October by 7.3%. The full freight segment showed particularly strong growth of 27.1%, thanks to the arrival of new airlines at Brussels Airport. The suspension of the activities of Ethiopian Airways, is expected to have a negative effect on growth in the coming months.

Air freight transport showed a decline across the whole of Europe. When it comes to belly cargo, down by 6.6% in October, Brussels Airport is no exception.

Flight movements
The number of flight movements at Brussels Airport remains more or less stable. Overall, the increase was a mere 0.8%. The average number of passengers per flight rose to 116 compared to 110 in October 2014. 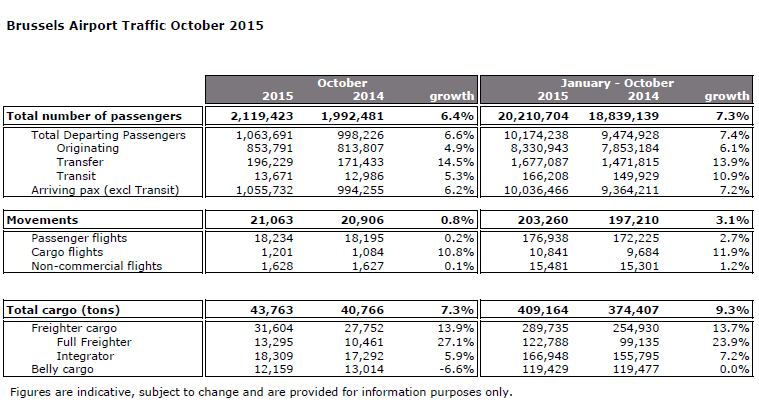