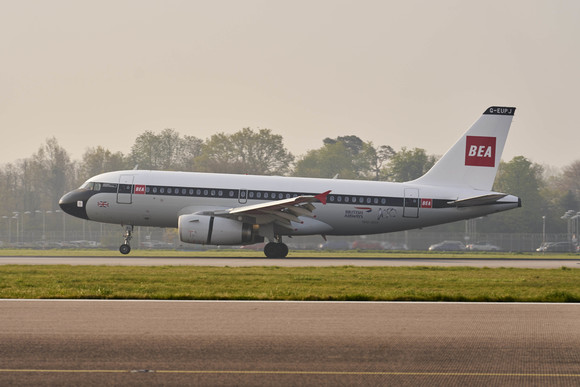 LONDON, UK, 2019-Aug-23 — /Travel PR News/ — Jersey residents will step back in time when British Airways celebrates 100 years of flying with a nostalgic entry in this year’s International Air Display on September 12.

One of the airline’s heritage aircraft, an Airbus A319 in the former British European Airways (BEA) livery, will take part in the flypast, one of the highlights of the Jersey show which attracts more than 25,000 visitors.

The A319, registration G-EUPJ, has been painted to mark British Airways’ centenary and is one of a collection of four heritage aircraft with vintage livery.

BEA flew predominantly on domestic and European routes between 1959 and 1968. However, there is one significant difference with the replica; the aircraft has a grey upper wing, rather than the traditional red, to meet current wing paint reflectivity requirements.

The historic lookback during the air show will continue on the ground where British Airways’ ambassadors in various heritage uniforms will welcome visitors to the show. There will be a special Club Europe fare on offer and a chance to win flights from Jersey to Milan, a new destination from London Gatwick this year.

British Airways operates a year-round service to Gatwick from Jersey, with 34 departures a week.

The airline has a long association with Jersey which began in 1933 when Jersey Airways, a forerunner of BEA and British Airways, launched its new route from Portsmouth. Until Jersey Airport opened in March 1937, the aircraft arriving on the island landed on the beach at St Aubin’s Bay.

Anne-Marie Ryan, British Airways’ airport manager Jersey, said: “We are delighted to play such a leading role in the Jersey International Air Display. It is particularly important this year to look back at our long and successful association and the part we have played in the island’s history.”

In its centenary year British Airways is hosting a range of activities and events. As well as looking back, the airline is also hosting BA 2119 – a programme, which will lead the debate on the future of flying and explore the future of sustainable aviation fuels, the aviation careers of the future and the customer experience of the future.

The airline will be working with expert partners to identify BA’s 100 Great Britons; the people up and down the country who are currently shaping modern Britain, and of course, the year would not be complete without some special flying and moments for customers.

The centenary activity is taking place alongside the airline’s current five-year £6.5bn investment for customers. This includes the installation of the best quality WiFi and power in every seat, fitting 128 long-haul aircraft with new interiors and taking delivery of 72 new aircraft. The airline will also be introducing new Club World seat with direct aisle access later this year.

A potted history of the Jersey service: