American Airlines is the first customer to benefit from the latest enhancements to the CRJ900 NextGen regional jet, which provides up to 5.5 per cent fuel burn reduction over earlier-generation CRJ900 aircraft.

“The new Bombardier CRJ900 NextGen airliner will optimize our fleet to fly the right size aircraft to the appropriate markets and lower operating costs by replacing older aircraft,” said Kenji Hashimoto, Senior Vice President – Regional Carriers, American Airlines. “With an impressive interior that allows us the flexibility to offer First Class, Main Cabin, as well as additional Main Cabin Extra seats, we are delighted to showcase our first CRJ900 NextGen aircraft in Dallas/Fort Worth and Dayton and look forward to introducing it to our customers later this year.”

“In addition to offering American Airlines significant fuel cost savings per aircraft, as well as outstanding operational flexibility, the CRJ900 NextGen aircraft will provide customers with an improved experience that includes bright cabins resulting from large windows and LED lighting as well as large overhead bins,” said Ray Jones, Senior Vice President, Sales, Marketing and Asset Management, Bombardier Commercial Aircraft. “Together with the fuel burn enhancements and upgraded cabin amenities, we are firmly cementing the CRJ NextGen family of aircraft as the benchmark in regional aviation.”

You may also be interested in:  Ethiopian Airlines Wins 2013 Airline Reliability Performance Award from Bombardier Aerospace for Third Year in a Row

About Bombardier
Bombardier is the world’s only manufacturer of both planes and trains. Looking far ahead while delivering today, Bombardier is evolving mobility worldwide by answering the call for more efficient, sustainable and enjoyable transportation everywhere. Our vehicles, services and, most of all, our employees are what make us a global leader in transportation.

Bombardier is headquartered in Montréal, Canada. Our shares are traded on the Toronto Stock Exchange (BBD) and we are listed on the Dow Jones Sustainability World and North America Indexes. In the fiscal year ended December 31, 2013, we posted revenues of $18.2 billion. News and information are available at bombardier.com or follow us on Twitter@Bombardier.

Bombardier, CRJ, CRJ900, NextGen and The Evolution of Mobility are trademarks of Bombardier Inc. or its subsidiaries. 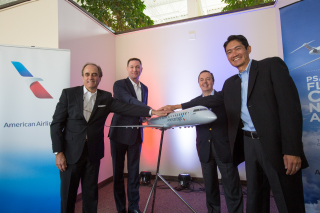