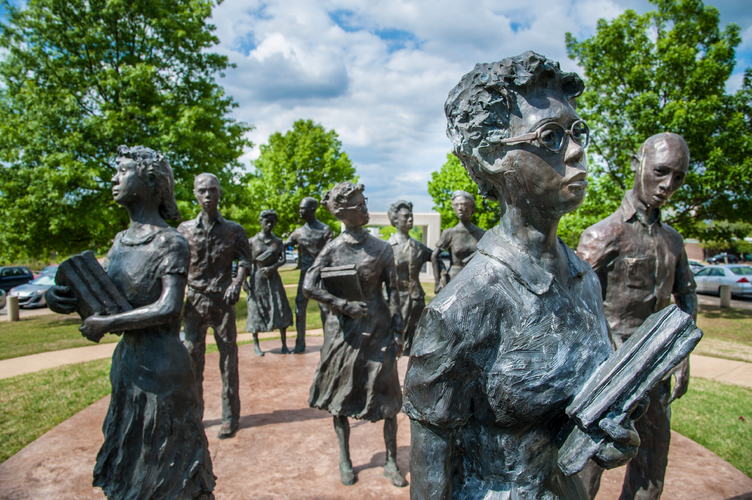 Initiative highlights Arkansas sites and links more than 100 landmarks across the U.S.

Central High School National Historic Site in Little Rock is one of the “Top Ten” sites on the trail, which links the country’s most important civil rights sites: more than 100 landmarks, including museums, churches, courthouses and memorials that were pivotal to the advancement of social equality during the volatile 1950s and 1960s.

Other Arkansas sites on the trail are:

Arkansas Civil Rights Heritage Trail
The trail marks sites in Little Rock that were significant to the Civil Rights Movement. It starts at the Old State House and will eventually end at the William J. Clinton Presidential Library and Museum.

Clinton Presidential Center
The William J. Clinton Presidential Library and Museum chronicles Clinton’s presidency and includes replicas of the Oval Office and Cabinet Room; on its grounds you can also find the Anne Frank Tree Exhibit that conveys the complex history of human rights in Arkansas.

Daisy Bates House
The home of Daisy Bates, who was president of the Arkansas chapter of the NAACP and liaison for the Little Rock Nine, was vandalized and bombed by those against integration. Her prominence as one of the few female civil rights leaders of the period was recognized by her selection as the only female to speak at the Lincoln Memorial at the March on Washington on August 28, 1963. The home is also a National Historic Landmark.

In addition to the Arkansas locations, the trail’s famous sites include the Edmund Pettus Bridge in Selma, Ala., the Greensboro, N.C., Woolworth’s, where sit-ins began, the National Civil Rights Museum at the Lorraine Motel in Memphis, Tenn., and King’s birthplace in Atlanta, Ga.

The website civilrightstrail.com profiles these landmarks and offers an interactive map, interviews with foot soldiers, past and present photographs and 360-degree video. Featured on the site is Little Rock resident Sybil Jordan Hampton, along with Katherine Sawyer of Topeka and Dorothy Lockett Holcomb of Farmville, who discuss their experiences during school integration after the 1954 Brown v. Board of Education court decision.

The U.S. Civil Rights Trail has been featured in The New York Times, Conde Nast Traveler, The Wall Street Journal and The Telegraph in London.

About Arkansas Tourism
Arkansas Tourism, a division of the Arkansas Department of Parks, Heritage and Tourism, strives to expand the economic impact of travel and tourism in the state and enhance the quality of life for all Arkansans. The division manages 14 Arkansas Welcome Centers and employs more than 60 staff members across The Natural State. For more information, visit www.arkansas.com.