The pilots continue to prepare for a possible strike, having approved a strike authorization vote by a 99 percent margin on May 17. The Hawaiian Airlines Master Executive Council (MEC) of the Air Line Pilots Association, Int’l (ALPA) now has $2 million in strike preparation funds available, thanks to a grant from the national union’s Major Contingency Fund.

“With the summer travel season moving into high gear Memorial Day weekend, the Hawaiian pilots will be picketing throughout the summer to remind our passengers that we are ready to strike if negotiations break down and the government allows a walkout,” said Hawaiian MEC chairman Capt. Hoon Lee. “We need to see real progress from management when we meet with them in June. Otherwise we will have to consider asking the mediator whether the talks have reached an impasse.”

Hawaiian’s 627 pilots have been in contract talks for more than a year and entered federal mediation in January. Before a strike could occur, the National Mediation Board would have to release the two sides from mediation, offer binding arbitration, and then go through a 30-day cooling-off period if either side declined arbitration.

The pilots seek a market-rate contract with pay, benefits, and work rules equivalent to those earned by other pilots whose airlines fly to Hawaii, including Delta, United, Alaska, and American. Hawaiian’s total pilot compensation lags as much as 45 percent behind its leading competitors, even though the company is earning record profits and its stock price has skyrocketed over the last five years.

“Rather than try to seek cooperative solutions, the company has decided to play poor and claim its massive profits aren’t enough to fund a competitive contract,” Lee said. “Today, our picketing is only informational, but we’re ready to picket for real this summer, if that’s what it takes.”

Founded in 1931, ALPA is the world’s largest pilot union, representing more than 51,000 pilots at 30 airlines in the United States and Canada. Visit the ALPA website at www.alpa.org or follow us on Twitter @WeAreALPA. 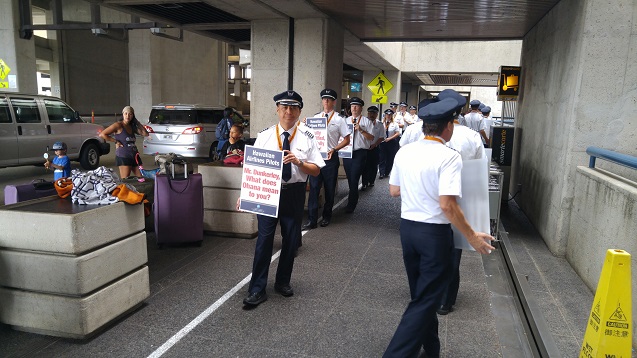