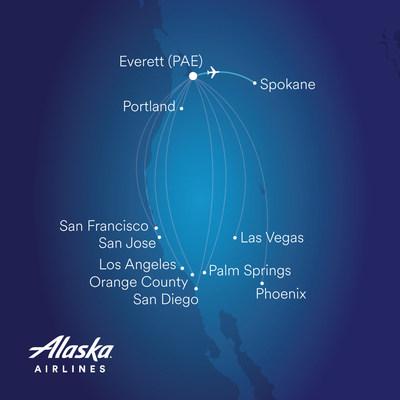 “When it comes to flights at Paine Field, our guests have been eager for one city to be added above all others right now – they said make it Spokane,” said David Besse, our manager of network planning. “We believe this route will be very popular, easily connecting family and friends, workers and businesses, between two dynamic regions of the state.”

“The announcement of scheduled service to Paine Field by Alaska Airlines fulfills one of the most important air service priorities for our region,” said Nancy Vorhees, Chair of the Spokane Airport Board.

Larry Krauter, CEO of Spokane International Airport added, “This new service to Paine Field will directly benefit the aerospace industry sector as it continues to expand in our region and create time-saving efficiencies for our business community overall. We’re thankful to Alaska for its commitment to the Spokane and Coeur d’Alene region!”

Alaska started commercial service at Paine Field on March 4, 2019. In that short time, flying in and out of Everett has become a popular, convenient option for many travelers, especially those who live north of Seattle who don’t want to drive to Sea-Tac Airport. As of late July, nearly 300,000 guests have flown Alaska’s flights at Paine Field.

“This is exciting news,” said Arif Ghouse, Paine Field Airport Director. “One of the questions I’ve been asked the most over the past few months is when service might start to Spokane. There will be considerable interest in the new flight.”

Alaska’s guests can connect with its Global Partners at gateway airports on the West Coast – such as Los Angeles and San Francisco – to fly to more than 900 destinations around the globe. Flyers can also earn and redeem miles with the airline’s highly-acclaimed Mileage Plan program.

Alaska Airlines and its regional partners fly 46 million guests a year to more than 115 destinations with an average of 1,200 daily flights across the United States and to Mexico, Canada and Costa Rica. Alaska Airlines ranked “Highest in Customer Satisfaction Among Traditional Carriers in North America” in the J.D. Power North America Airline Satisfaction Study for 12 consecutive years from 2008 to 2019. Learn about Alaska’s award-winning service at newsroom.alaskaair.com and blog.alaskaair.com. Alaska Airlines and Horizon Air are subsidiaries of Alaska Air Group (NYSE: ALK).