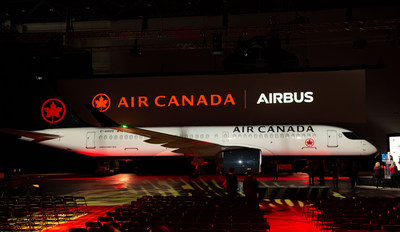 Air Canada unveiled the newest member of its fleet, the Airbus A220-300

MONTREAL, CANADA, 2020-Jan-17 — /Travel PR News/ — Air Canada today (Jan. 15, 2020) unveiled the newest member of its fleet, the Airbus A220-300, before employees and special guests at the airline’s Montreal headquarters. Built in Mirabel, Quebec, the Bombardier-designed aircraft continues Air Canada’s fleet modernization. The A220’s state-of-the-art design and cabin is destined to be extremely popular with customers, and this new aircraft will also help Air Canada reduce its carbon footprint through a 20 per cent reduction in fuel consumption per seat.

“This is an historic moment for Air Canada as we welcome the Airbus A220 into our fleet. We are the first airline in Canada to operate this next-generation aircraft, which was designed by Bombardier in Mirabel, Quebec. Our customers will enjoy a level of comfort unrivalled on a single-aisle aircraft and the A220’s operating efficiencies promise meaningful environmental and cost benefits. The arrival of the first of our order of 45 A220s, with a list price value of US$3.8 billion at the time it was made, underscores our contribution to Canada’s aerospace industry and its economy,” said Calin Rovinescu, Air Canada’s President and Chief Executive Officer.

“I am especially pleased today given Air Canada’s role in completing the 2016 order for the C Series, as it was then called, at a time when the future of this aircraft program was in doubt. We are very proud to have paved the way for orders from other major carriers,” said Mr. Rovinescu.

“Airbus is very proud to be celebrating with our longstanding customer Air Canada, as they add their first A220 to their fleet. Airbus has been in Canada for over 35 years, and today we are becoming even more Canadian as passengers from Canada are about to discover a brand new flying experience on board this state-of-the art Canadian-designed and built aircraft. Congratulations to everyone at Air Canada and to the Airbus Canada team in Mirabel for this fantastic achievement. We look forward to continuing to develop our partnership with Air Canada for the years to come,” said Philippe Balducchi, CEO, Airbus Canada Limited Partnership and Head of Country Canada for Airbus.

A220 Opens Up New Opportunities for Air Canada

Passengers will be welcomed aboard the A220-300 on January 16, 2020, on its maiden commercial flight between Montreal and Calgary. As more A220s enter the fleet, the aircraft will be initially deployed from Montreal and Toronto on existing Canadian and transborder routes such as to Ottawa, Winnipeg, Calgary, Edmonton and New York – La Guardia.

The first two new A220 routes for Air Canada begin May 4, 2020 with the launch of Montreal-Seattle and Toronto-San Jose, California service, the only non-stop service between these city pairs.

“The A220 will allow Air Canada to further strengthen our position on transborder and transcontinental markets and be instrumental in our continued growth. The A220 will allow us to further expand our North American network, offering customers new routes and more robust year-round schedules. When connecting through our hubs across Canada onward to international destinations, customers travelling on an A220 will benefit from a virtually seamless cabin experience offering a comparable level of service and comforts as on a widebody aircraft,” said Mark Galardo, Vice President of Network Planning at Air Canada.

Air Canada has firm orders for 45 A220s, with a total list price value of US$3.8 billion for the order at the time it was made, all of which are to be built at Mirabel.

Air Canada will be the first North American carrier to operate the larger A220-300 version of the aircraft, which has a range of 3,200 nautical miles.

The two-class cabin has 137 seats: 12 in a 2×2 configuration in Business Class and 125 in a 3×2 layout for Economy passengers. Customers will have more personal space thanks to the widest economy seats in the fleet at 19 inches, and the largest overhead stowage bins for an aircraft this size.

Additional features include larger windows and full-colour LED ambient and customizable mood lighting that contribute to reducing fatigue while travelling. The high ceilings, extra shoulder room and storage make this an unparalleled interior in the narrow-body segment.

Every seat on the A220 features a Panasonic in-flight entertainment system with content available in 15 languages and featuring more than 1,000 hours of high-quality entertainment, including content from Bell Media’s premium entertainment service, Crave, and Montreal-based multi-platform audio service, Stingray. The system also offers dynamic closed captioning for the deaf and is accessible to the visually impaired. The A220 will also have satellite-based, high speed Wi-Fi access.

The A220 will also further Air Canada’s environmental commitment, with engines projected to yield a 20 per cent reduction in fuel consumption per seat.

Air Canada is Canada’s largest domestic and international airline serving nearly 220 airports on six continents. Canada’s flag carrier is among the 20 largest airlines in the world and in 2019 served over 51 million customers. Air Canada provides scheduled passenger service directly to 62 airports in Canada, 53 in the United States and 101 in Europe, the Middle East, Africa, Asia, Australia, the Caribbean, Mexico, Central America and South America. Air Canada is a founding member of Star Alliance, the world’s most comprehensive air transportation network serving 1,250 airports in 195 countries. Air Canada is the only international network carrier in North America to receive a Four-Star ranking according to independent U.K. research firm Skytrax, which also named Air Canada the 2019 Best Airline in North America. For more information, please visit: aircanada.com/media, follow @AirCanada on Twitter and join Air Canada on Facebook.