Bergamo was one of the first airports WIZZ added to its low-fare route network in May 2004 and since then, the airline has constantly expanded its network connecting Lombardy with more and more Central and Eastern European destinations. With the recently announced Suceava and Podgorica services, Wizz Air’s Bergamo network now consists of 19 routes to 10 countries.  Together with Bergamo, Wizz Air operates flights from 14 Italian airports offering 80 routes to 21 destinations.

Wizz Air’s commitment to Bergamo is underlined by the significant growth in passenger numbers. In 2015, Wizz Air carried nearly 500,000 passengers on its low fare routes to and from Bergamo, a 15% growth year over year.

The first WIZZ flight with an Airbus A321ceo aircraft is an important milestone in the airline’s Bergamo operations. The type was first deployed in WIZZ’s fleet in November 2015 and Wizz Air now has seven A321 aircraft flying its most popular routes. The airline’s Bucharest route from Bergamo is already operated with one of these aircraft and from February 2017, one is planned to be deployed on WIZZ’s Sofia service, too.

With 230 seats on board, the Airbus A321ceo is the most efficient single-aisle passenger aircraft.  The aircraft’s superior operating economics mean that WIZZ offers more seats to more destinations at WIZZ’s lowest fares at the same time as delivering the lowest emissions and noise footprint in its class.

WIZZ will take 30 of the current version A321 aircraft through 2018 and then begin accepting delivery of the A321neo, featuring advanced engine technology, in 2019. The continued investment in new technology reflect Wizz Air’s commitment to become the most efficient airline in Europe and this, in turn, will help ensure that Wizz Air remains Central and Eastern Europe’s largest low-cost fare airline.

Gabor Vasarhelyi, Corporate Communications Manager at Wizz Air, said: “We are thrilled to celebrate the first landing of one of our brand new Airbus A321 aircraft at Bergamo Airport. We have carried over three million passengers on our low-fare routes during the 12 years of fruitful cooperation with the airport and this important milestone once again underlines our commitment to Bergamo passengers. The deployment of the 230-seat Airbus A321 aircraft, as the most efficient single-aisle aircraft in the sky, will help us keep our fares low and expand our ever-growing network, while we will keep on enhancing customer experience and delivering excellent onboard service on each WIZZ flight. Our friendly crew looks forward to welcoming you on board one of our Airbus A321!” 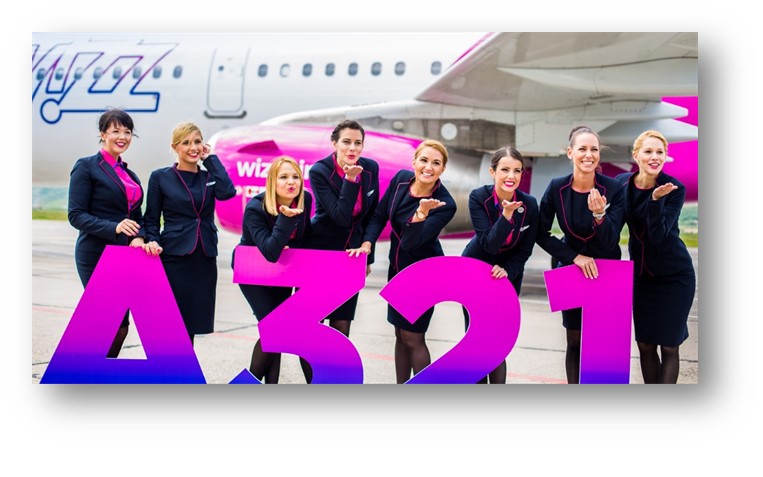