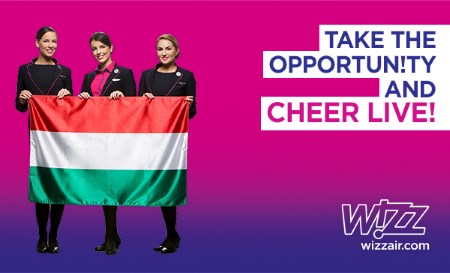 SPECIAL FLIGHTS FOR FANS OF THE HUNGARIAN NATIONAL TEAM

During the first three matches of the Hungarian National Team in France the airline will operate direct flights between Budapest and Lyon, Marseille and Bordeaux to give the unique opportunity to all football fanatics to witness the historical moment of Hungary challenging itself at an international football competition for the first time in 30 years.

WIZZ will operate the three special flights in June 2016 adapted exclusively to the schedule of the matches. The flights will be operated with an Airbus A321 and will land in France before 14:00 HRS and take off after the game shortly before 24:00 HRS. Tickets are available only as return at a price from HUF 99,900* for both ways and can be booked at wizzair.com from 16 December 2015.

György Abrán, Chief Commercial Officer of Wizz Air said: “We are thrilled with the Hungarian National Team’s achievement and, as the leading airline in Hungary, want to celebrate the great results together with the fans. We provide a very convenient opportunity for all the football enthusiasts to watch their favorite players perform live and return home the same evening. Hungary has been waiting for 30 years for this event and we want to reward the remarkable results by offering direct flights that can be booked on wizzair.com.”