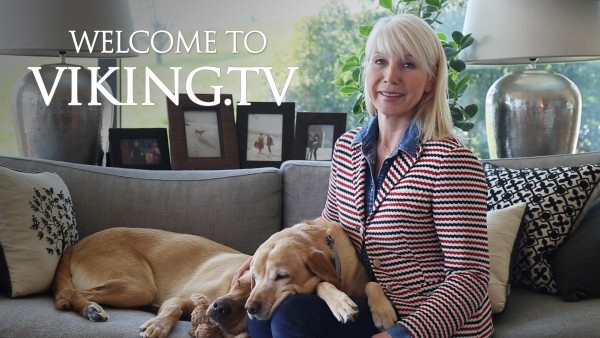 Viking marks the second anniversary of its enrichment channel, Viking.TV

Anniversary Week to Feature New Content Highlighting Life “Back on Board”

Los Angeles, CA, 2022-Mar-30 — /Travel PR News/ — This week, Viking® (www.viking.com) marks the second anniversary for its award-winning enrichment channel, Viking.TV (https://viking.tv), with new content highlighting life “Back On Board.” Launched in March 2020, Viking.TV was conceived as a way to build community and stay connected with people and places around the world. After 24 months, Viking.TV has been enjoyed by more than two-and-a-half million viewers and has broadcast more than 700 live sessions featuring original content, Viking cultural partners and virtual Privileged Access®.

“Two years ago, Viking.TV was created to provide a source of daily positivity, learning and connection, when there was great uncertainty and isolation in the world,” said Karine Hagen, Executive Vice President of Viking. “Thank you to all those who have participated in this special online community—including our esteemed guests, hosts and cultural partners. As many of us are once again traveling and experiencing incredible destinations around the world, we will continue to provide cultural enrichment on Viking.TV that supplements exploration in meaningful ways.”

When consulting with two of Viking’s godmothers, NASA astronaut Dr. Anna Fisher and polar explorer Liv Arnesen, both well trained in survival techniques through periods of isolation—on board the space shuttle and crossing Antarctica, respectively—it was clear that routine is key to well-being during times of stress and isolation. Therefore, Viking.TV was designed to air at the same time every day to give viewers—both Viking travelers and those who have not yet traveled with Viking—something to look forward to, that would not only enrich their minds, but also give them the possibility to engage with experts live, albeit virtually. Viking.TV livestream sessions start every day at 2 p.m. Eastern Time / 11 a.m. Pacific Time, with all content archived and available on-demand for anyone who cannot view at the original time of the broadcast.

All of the sessions can be viewed in Viking.TV’s extensive archived content library and at the viewer’s leisure. Also, on Viking.TV there are more than 200 original short-form Destination Insight documentaries and 60 additional pieces of content from Viking Cultural Partners, with programming from TED, BBC’s Wonderstruck, Libera and more. Additionally, a new video showcasing Viking.TV highlights from the past two years has been published online here.

In the past two years, Viking.TV has received accolades for the channel and was given the “Breakthrough Award for Product Innovation” in the 2020 Silver Travel Awards. Additionally, viewers continue to write to Viking with comments of gratitude for the opportunity of exploration and cultural enrichment from home.

Examples of feedback include: