Washington, D.C., 2016-May-04 — /Travel PR News/ — On exhibit for the first time in the Washington, D.C. region, the Smithsonian’s National Zoo presents “Washed Ashore: Art to Save the Sea” from May 27 through Sept. 5. Made completely of plastic debris collected from beaches, the colorful and dramatic sculptures of marine animals represent the more than 315 billion pounds of plastic in oceans today and underscore the need for wildlife conservation. Admission to the Zoo and this exhibit is free.

Made possible with the support of Friends of the National Zoo, visitors are invited to get up close to view the sculptures, which range from a 12-foot-long shark and 16-foot-long parrot fish to an 8-foot-wide octopus and a 20-foot-long coral reef. Seventeen sculptures of marine life will be installed along the Zoo’s Olmsted Walk, in the Visitor Center and at the Amazonia exhibit. Visitors can see marine animals affected by wast–including sea lions, brown pelicans and coral–on view at the Zoo’s American Trail and Amazonia Science Gallery, respectively.

“We’re excited to bring conservation science and art together to connect our visitors to the impact of trash on ocean health,” said Dennis Kelly, Zoo director. “The Smithsonian’s National Zoo and Conservation Biology Institute is committed to saving marine species and is a pioneer in coral-reef research and conservation. While intricate and captivating, these sculptures are a powerful reminder of our personal role and responsibility in preserving global biodiversity on land and in the sea.”

The ocean produces more than 50 percent of the world’s oxygen, and coral reefs nurture more than a quarter of all marine life. Using procedures similar to those used in human sperm banks, Smithsonian Conservation Biology Institute (SCBI) scientist Mary Hagedorn and her team are global leaders in conserving coral reefs and the ecosystems that they build. Increased greenhouse gases are warming and acidifying oceans across the planet, causing a widespread coral-reef crisis. By pioneering coral cryo-conservation and collecting and storing coral sperm from threatened reefs to produce new colonies in the lab for captive-bred and wild-colony conservation, SCBI is building a potential lifeline for species under threat from climate change, pollution and overfishing. Scientists at the Smithsonian are helping ensure a future for coral reefs and the species that count on them for survival as ocean environments change.

“The National Zoo–America’s zoo–has given us a global platform to present our art to educate a world audience about how plastic pollution is posing a dangerous and perhaps catastrophic threat to the world’s oceans and sea life,” said Angela Haseltine Pozzi, lead artist and Washed Ashore executive director.

Under the leadership of Pozzi, Washed Ashore Project volunteers clean beaches and process the debris into art supplies. To date, thousands of volunteers have processed an estimated 18 tons of garbage collected from more than 300 miles of coastline to create 68 sculptures. As lead artist, Pozzi orchestrates the construction of these towering, striking sculptures of marine life. Each sculpture was created using hundreds of individual pieces, from flip-flops and bottle caps to nylon rope, Styrofoam and lighters.

Based in Bandon, Ore., the Washed Ashore Project is a non-profit dedicated to educating and creating awareness about marine debris and plastic pollution through art. “Washed Ashore: Art to Save the Sea” is a traveling exhibit that has been featured at different locations throughout the country.
Related Programs
Washed Ashore’s “Turtle Ocean” / On view beginning June 8
Sant Ocean Hall / Smithsonian’s National Museum of Natural History

In addition to the 17 sculptures on view at the National Zoo, visitors can see “Washed Ashore: Art to Save the Sea’s” “Turtle Ocean”&rdquo; in the National Museum of Natural History’s Sant Ocean Hall. Created by Washed Ashore director Angela Haseltine Pozzi, “Turtle Ocean” depicts an entangled Hawksbill turtle swimming in an environment of water-bottle sea jellies and beached flip-flop anemones along with marine-debris seaweed and coral made of old buoys, crates and buckets. Hawksbill sea turtles face many threats, including mistakenly ingesting marine trash for food. All six species of sea turtles found in U.S. waters are threatened or endangered. The Sant Ocean Hall is the Museum’s largest exhibit, providing visitors with a unique introduction to the majesty of the ocean. The hall’s combination of 674 marine specimens and models, high-definition video and the newest technology allows visitors to explore the ocean’s past, present and future. For World Oceans Day programming at the Sant Ocean Hall, visit the Museum’s website. For more ocean information, visit https://ocean.si.edu.

It is not just marine animals who depend upon the ocean for survival. Visitors can celebrate World Oceans Day at the Zoo with educational activities, animal demonstrations and crafts. 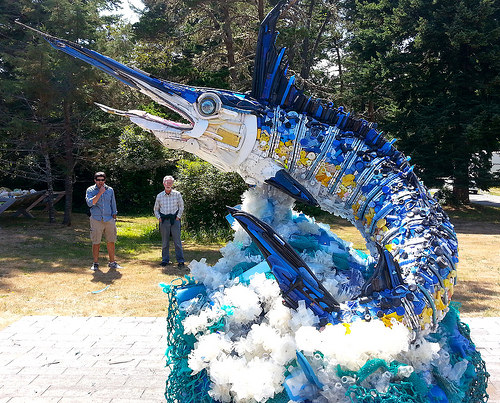 The Smithsonian’s National Zoo presents “Washed Ashore: Art to Save the Sea” from May 27 through Sept. 5