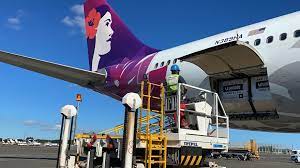 Zurich, Switzerland, 2021-Dec-22 — /Travel PR News/ — Swissport and Hawaiian Airlines have signed a ground services contract for the airline’s Australian operations at the Sydney and Brisbane airports. The contract adds to the strong international partnership between the airline and Swissport.

Swissport has won a contract extension with Hawaiian Airlines, a leading carrier for leisure travel to Hawaii. The agreement covers ground services for the airline’s Australian operations at Sydney Airport (SYD) and Brisbane Airport (BNE). Swissport has already started serving Hawaiian on 15 December as the airline restarted its five-times-weekly service between Sydney and Honolulu’s Daniel K. Inouye International Airport (HNL).

“We are absolutely delighted to welcome Hawaiian Airlines as a new customer in Australia,” says Brad Moore, Swissport’s Managing Director – Australasia. “Our selection followed a comprehensive tender process and thorough review of our capability and performance. The strong reputation of our business in this region and of our teams in Sydney and Brisbane ensured the successful outcome. The new contract represents an exciting new phase in Swissport and Hawaiian Airlines’ long and successful relationship in the US, Korea and Japan.”

“Our partnership with Swissport will help our airline make a smooth and swift return to Australia, allowing us to provide the same hospitable, award-winning travel experience that Hawaiian Airlines is known for,” said Andrew Stanbury, regional director of Australia and New Zealand at Hawaiian Airlines.

Swissport partners with all major domestic airlines and several leading international carriers at 26 airports across Australia and New Zealand and has recently expanded into the airport lounge business.