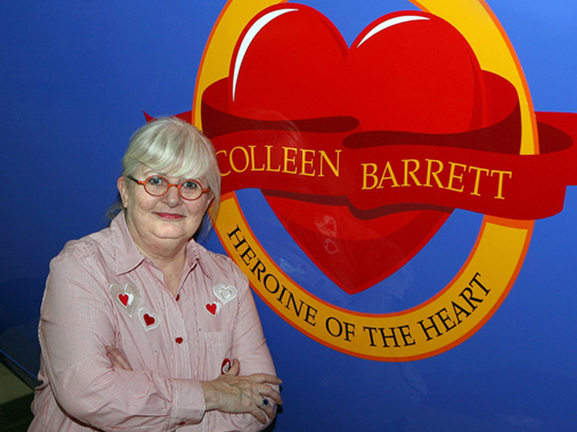 As the Company celebrates its 50-year history, the CCB Institute honors Southwest Airlines’ President Emeritus, Colleen Barrett, and establishes a center where individuals and organizations can learn about the tenets of Southwest’s legendary Culture, Leadership, and Hospitality. The CCB Institute provides practical resources to help others learn from her remarkable example, and offers inspiration for individuals and organizations to make long-lasting, positive impacts in our organizations and our world.

It’s no secret that much of the success of Southwest centers on its People-first Culture. A concept often admired around the world, but rarely replicated. Colleen is a driving force and credited for developing Southwest’s Legendary Customer Service, which became the gold standard not only for airlines but also for many customer-facing companies. She was famous for writing letters back to Customers and for sending heartfelt notes to Employees when she saw something that impressed her.

“Colleen has always valued Employees like Family, which is the Heart and soul of our Culture today at Southwest,” said Whitney Eichinger, Managing Director Culture & Engagement. “The CCB Institute provides a home for the practical application of her core values—living by The Golden Rule with a Servant’s Heart, Warrior Spirit, and a Fun-LUVing Attitude—while sharing stories, memories, and examples of how that ethos shaped Southwest into the airline of today.”

You may also be interested in:  TAP Air Portugal recognized in Phoenix at the 2019 MicroStrategy Customer Awards

Prior to joining Southwest in 1978, Colleen worked for several years as an Executive Assistant to Southwest Founder, Herb Kelleher, at his law firm. Colleen oversaw management, leadership, and budget responsibilities for a variety of areas/groups. She was a member of the airline’s Executive Planning Committee, Southwest’s Executive Planning Committee, and chaired numerous special Teams, task forces, and committees relating to Internal and External Southwest Customers. Colleen also became the first woman president in the airline industry when she assumed the role in 2001. Her influence on the unique Culture of Southwest since the very beginning is indelible, and she is beloved by the Southwest Family.

In addition to revealing more about Colleen’s life, career path, and trailblazing actions, the CCB Institute serves up a wealth of resources including books, videos, articles, and podcasts from and about Colleen, Southwest, and other Company Leaders. Grounded in her wisdom, the site reflects and offers insight into several programs she created which are cornerstones in Southwest’s Culture and recognition programs today. There are also many heart-warming stories from Employees on how she has personally influenced their lives. Moving forward, the CCB Institute will continue to add resources such as an email newsletter and educational events.

In its 50th year of service, Dallas-based Southwest Airlines Co. continues to differentiate itself from other air carriers with exemplary Customer Service delivered by more than 56,000 Employees to a Customer base that topped 130 million Passengers in 2019. Southwest has a robust network of point-to-point service with a strong presence across top leisure and business markets. In peak travel seasons during 2019, Southwest operated more than 4,000 weekday departures among a network of 101 destinations in the United States and 10 additional countries. In 2020, the carrier added service to Hilo, Hawaii; Cozumel, Mexico; Miami; Palm Springs, Calif.; Steamboat Springs; and Montrose (Telluride/Crested Butte), Colo. Thus far in 2021, Southwest has initiated service to Chicago (O’Hare) and Sarasota/ Bradenton, both on Feb. 14; Savannah/Hilton Head and Colorado Springs, Colo., both on March 11; Houston (Bush) and Santa Barbara, Calif., both on April 12; Fresno, Calif., on April 25; Destin/Fort Walton Beach on May 6; as well as Myrtle Beach S.C., on May 23; and will begin service to Bozeman, Mont., on May 27; Jackson, Miss., on June 6; and Eugene, Ore., on Aug. 29. The Company also has announced an intention to initiate new service to Bellingham, Wash., later this year.

You may also be interested in:  Southwest Airlines releases Leadership book "Leading with Heart: Living & Working the Southwest Way