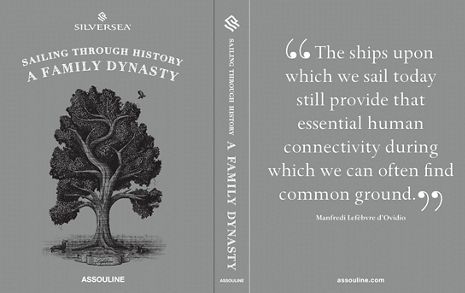 New York, NY, 2019-Nov-08 — /Travel PR News/ — In the year of Silversea’s 25th anniversary, the cruise line has launched the Lefebvre family book—Sailing through History: A Family Dynasty—which chronicles Silversea’s distinguished heritage, as part of the illustrious history of its founding family. Unveiled at a dedicated event aboard Silver Wind in New York on November 6, the book is now available for guests to enjoy aboard each of Silversea’s ships.

“I am proud to share the Lefebvre family history, and that of Silversea Cruises, with my friends, family, and the broader cruise community,” says Manfredi Lefebvre d’Ovidio, the Executive Chairman of Silversea Cruises. “An extensive family in its own right, our cruise line is built on generations of maritime experience and a history of innovation. Written to honour my father and our ancestors, Sailing through History: A Family Dynasty celebrates the distinguished heritage that has contributed to Silversea Cruises’ status as the industry leader. I extend my gratitude and thanks to those who helped with its creation.”

Published by Assouline Publishing, and with a foreword by Paul Theroux and an exclusive interview with Manfredi Lefebvre d’Ovidio by Peter Greenberg, the new book offers a fascinating insight into the defining history of one of Europe’s most eminent families. With anecdotes spanning from sixteenth-century France to Royal Caribbean’s acquisition of Silversea shares in 2018, the text brings to the fore the family’s royal connections, its social prominence, and its numerous commercial accomplishments, while providing historical context to the world’s leading ultra-luxury cruise line.

The Launch of Sailing through History: A Family Dynasty comes in the milestone year of Silversea Cruises’ 25th anniversary. In the text, readers learn how Antonio Lefebvre, “brilliant, restless, inventive, and scholarly,” brought innovation to the cruise industry when he launched the pioneering cruise line in Monaco in 1994. Since then – and under the watchful leadership of his son, Manfredi Lefebvre d’Ovidio, since 2001 – Silversea has welcomed almost half a million guests on approximately 4,200 voyages; the cruise line’s ships have completed an accumulated total of over 48,000 cruise days; and its guests have travelled deeper on a combined total of more than 9.4 million cruise days. Bestowed to his son in his final days, Antonio Lefebvre’s dream for Silversea Cruises was to grow the cruise line’s fleet to 12 ships—to which Manfredi adds “at least 12 ships!” Now with eight vessels in service and five new ships already on order, Manfredi Lefebvre d’Ovidio will soon fulfil, and exceed, his father’s vision.

About Silversea
Silversea Cruises, in which Manfredi Lefebvre d’Ovidio serves as Executive Chairman, is recognised as an innovator in the ultra-luxury cruise line industry, offering guests large-ship amenities aboard its intimate, all-suite vessels: Silver Wind, Silver Shadow, Silver Whisper, Silver Spirit and Silver Muse – all designed to offer an atmosphere of conviviality and casual elegance. With the inclusion of the expedition ships Silver Explorer, Silver Galapagos, and Silver Cloud, Silversea’s itineraries encompass all seven continents and feature worldwide luxury cruises to the Mediterranean, Caribbean, both Polar Regions and hundreds of fascinating destinations in between. Silversea is also looking forward to the launch of five new ultra-luxury ships: Silver Moon, Silver Dawn, Silver Origin, and two Evolution-class ships. Browse Silversea’s new blog Discover and subscribe to receive the latest content directly into your inbox.