Aberdeen, Scotland, 2013-11-4 — /travelprnews.com/ — FirstGroup has been shortlisted for the ScotRail franchise competition by the Scottish Government. The Group currently operates the franchise which provides passenger train services throughout Scotland. The new ten year contract, with a potential break point after five years, will be awarded next year and is expected to start in April 2015.

“We are delighted to have been shortlisted for the ScotRail franchise competition.

“As a Scottish company, we are proud to run Scotland’s railway and proud of our success in growing the business. First ScotRail now carries 83 million passengers a year, 30% more than in 2004, and has introduced 300 more services per day, whilst seeing record high customer satisfaction scores. We also hold the title of Scottish Public Transport Operator of the Year.

“The railway is integral to Scotland’s growing and ambitious economy and we look forward to submitting a compelling, competitive and value for money bid which meets the needs of customers, businesses and taxpayers. We have demonstrated that we have the capability and commitment to meet that challenge and deliver for the people of Scotland.” 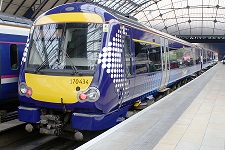