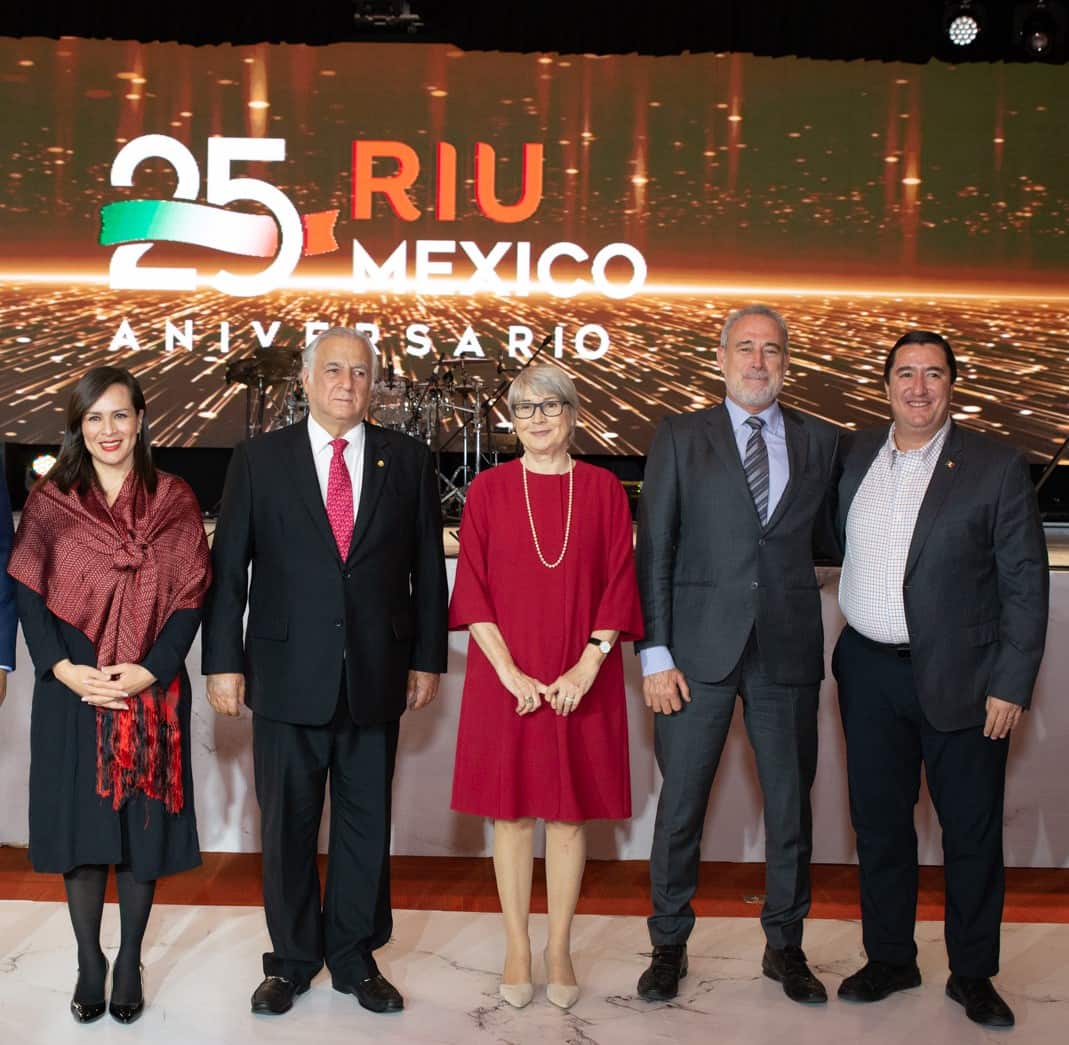 Palma de Mallorca, Mexico, 2023-Jan-19 — /Travel PR News/ — RIU Hotels & Resorts celebrated their 25th anniversary in Mexico in style with a huge party at the Riu Plaza Guadalajara hotel on Thursday 12 January. The event was headed up by Miguel Torruco Marqués, Tourism Secretary for Mexico and Carmen and Luis Riu, CEOs of the hotel chain. Three hundred people were in attendance, including the authorities, commercial partners, important suppliers, trade unions, RIU managers, members of the public from Jalisco and a large Riu-family contingent.

The party kicked off with a sophisticated cocktail on the pool terrace with entertainment from the renowned Mariachi Corona band, and a spectacular son et lumière projected onto the hotel’s façade which ran through the most emblematic cultural items and hotels of each state where RIU is present. Following this the guests went down to the Guadalajara Hall where they were served an elegant dinner with an ample selection of wines and spirits.

During the pre-dinner speeches, Carmen Riu highlighted how important Mexico is to RIU, how much the company has learnt from this country and those it works with there, and expressed the company’s deep gratitude. Miguel Torruco, Mexico’s Tourism Secretary spoke of the importance of the tourism sector and thanked RIU for their overwhelmingly excellent relations and collaboration throughout the years. In turn, Francisco Xavier Orendáin de Obeso, General Strategic Coordinator for Economic Growth and Development of the State of Jalisco and Claudia Vanessa Pérez Lamas, Tourism Secretary for the State of Jalisco talked about RIU’s journey in Mexico and thanked them for choosing Guadalajara as the place to celebrate such an important date.

You may also be interested in:  European Regions Airline Association announces results of its board elections

The real surprise of the night was the Riu Party. For the first time since its launch in 2018, the Riu Party left the confines of its holiday hotels to fill the large Guadalajara Hall with music, dancing, acrobatics, light shows, cold fireworks, confetti and a tremendous amount of vitality. The party guests got to experience 15 minutes of what the Pink Party, White Party, Neon Party and Jungle Party options offer RIU guests in more than 20 hotels. Just as in the hotels, the guests joined in the party dancing to the music with balloons, the flashlights on their mobiles and glow sticks. The Riu Party got everyone into the party mood and filled the dancefloor for the Live Band Covers concert, who have been livening up the best parties in the city of Guadalajara for years.

This event will be remembered for years to come for the sheer number of people in attendance and the amount of work that went into creating a moment to enjoy and celebrate, the real icing on the cake of a year of celebrations in honour of Riu’s 25th anniversary in Mexico, which kicked off with a breakfast club in Acapulco’s Tourism Fair in May.

Mexico is Riu’s top destination in all aspects. It all started in 1997 with the Riu Yucatán in Playa del Carmen (Quintana Roo) and 25 years on, RIU now has 22 hotels across five states: Baja California, Sinaloa, Jalisco, Nayarit and Quintana Roo. All in all, RIU has some 13,000 rooms in Mexico and works with more than 10,000 of its people, representing 40% of the total RIU staff: Mexicans are RIU’s most important collective.  And not only is it the main international destination, but Mexico is also the third largest target market for RIU with over 800,000 clients in 2022.

You may also be interested in:  British Airways launches its latest winter sun campaign

You can see why, therefore, RIU has pulled out all the stops to celebrate such a meaningful anniversary for the hotel chain.

The international RIU chain was founded in Mallorca by the Riu family in 1953 as a small holiday firm and is still owned by the family’s third generation. The company specialises in holiday resorts and over 75% of its establishments offer its acclaimed All Inclusive by RIU service. With the inauguration of its first city hotel in 2010, RIU is expanding its range of products with its own line of city hotels called Riu Plaza. RIU Hotels & Resorts now has 100 hotels in 20 countries. In 2021, the chain welcomed 4,2 million guests and provided jobs for a total of 28,004 employees. RIU is currently the world’s 32nd ranked chain, one of the Caribbean’s most popular, the second largest in Spain in terms of revenue and the fourth largest in number of rooms.