Ras Al Khaimah, UAE, 2013-09-06 — /travelprnews.com/ — The commercial growth path of RAK Airways is strategically winning attention. The first destination launch for the airline, in 2013 is into the capital of Pakistan – Islamabad.

On July 2, Mr. Murabit Al Sawaf, President and CEO of RAK Airways at a press briefing in Hilton Resort and Spa in Ras Al Khaimah made a bold statement that RAK Airways ambitious growth plan underlines 40 destinations by 2015.

Four weeks later the airline announced its launch into two capitals – Islamabad and Amman in August 2013 and the expansion of its current fleet.

Before the flight took off, HH Sheikh Omar Bin Saqr Al Qassimi, Chairman of RAK Airways with Mr. Murabit Al Sawaf, President and CEO of the airline, together cut the ceremonial cake in the presence of well-wishers at the Pearl Lounge at Ras Al Khaimah Airport.

Speaking of the airline’s first destination launch in 2013, Mr. Murabit Al Sawaf, President and CEO of RAK Airways said, ‘This is our first entry into the capital of Pakistan and we are proud to say that our bookings on our weekly two flights looks very encouraging. We are aspiring to see a significant rising curve of our passenger numbers with the Islamabad launch.’

With the introduction of Islamabad, RAK Airways, the full service carrier flying out of the Emarate of Ras Al Khaimah in UAE has spread its route map to 10 destinations – Jeddah, Doha, Chittagong, Dhakka, Peshawar, Lahore, Kathmandu, Cairo, Calicut and Islamabad. 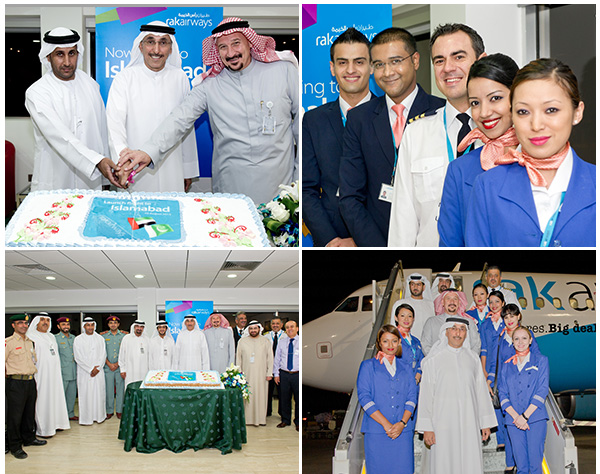 RAK Airways made its first flight from Ras Al Khaimah to Islamabad on August 5, 2013