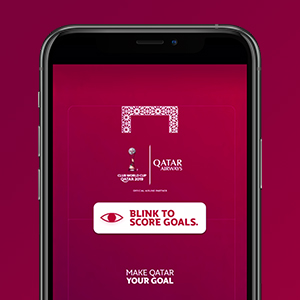 DOHA, Qatar, 2019-Dec-12 — /Travel PR News/ — Qatar Airways has launched a new Augmented Reality (AR) experience that allows customers to play an innovative football game where they must ‘Blink to Score.’ This immersive feature lets the player interact through a virtual experience on Facebook. By connecting reality and the virtual world, fans will now be able to playfully engage with the Qatar Airways brand.

The award-winning airline has set another precedent, becoming the first regional carrier to leverage the newly launched Facebook AR ads format, enabling consumers to play the AR game directly from Facebook’s newsfeed, without having to install additional applications.

Qatar Airways has launched a creative campaign with football legend Xavi playing the AR game, delivering the first of its kind experience on the Facebook app to millions of football fans across the world. This initiative is directly in line with the airline’s mission of bringing people together.

Qatar Airways Senior Vice President Corporate Communications, Ms. Salam Al Shawa, said: “Qatar Airways is constantly pioneering new ways to interact with our passengers, and we are grateful to Facebook for sharing our passion for innovation to enhance our customers’ experience. Excitement is building as the FIFA Club World Cup Qatar 2019TM gets underway and we are delighted to welcome the football world to Qatar, the destination of champions.”

Facebook’s Managing Director for MENA, Mr. Ramez Shehadi, said: “The use of AR is growing among people and businesses in our region. From try-on product experiences to immersive filters for games and movies, AR enables people to connect with businesses and products in new ways. We are excited to pilot this new ad format with Qatar Airways to build more engaging mobile ad experiences and boost audience engagement.”

AR games have now been linked with Facebook ads, by incorporating call-to-actions within the AR experience. Customers can go seamlessly between engaging with the Qatar Airways brand to learning more about packages to attend the FIFA Club World Cup Qatar 2019TM.

As part of the Make Qatar Your Goal campaign, the award-winning airline announced exciting flight offers on Economy and Business Class tickets as well as packages from the world to Doha. Qatar Airways invites its customers to book flights to see the stars of world football in action at the FIFA Club World Cup Qatar 2019TM between 11 and 21 December.