Visitors to Durban – South Africa’s third largest city – will appreciate its subtropical climate, culturally diverse population and the variety of outdoor activities. Known for its beautiful beaches and warm seas, the city enjoys 300-plus days of sunshine during the year, ideal for surfing and shopping at its various outdoor markets.

Qatar and South Africa have a very strong trade relationship, further strengthened by Durban’s significant economic growth which has been bolstered by a number of multinational companies recently building their presence in the city. Qatar Airways’ new route will help to meet a growing demand from passengers seeking business and leisure trips to Durban and will better serve travellers from South Africa who are seeking greater connections to the Middle East, Europe, United States, Asia Pacific and South Asia.

“Qatar is one of South Africa’s largest trading partners in the Middle East and we are proud to strengthen this business relationship with the launch of our new route connecting Durban directly to Doha. With its excellent aviation infrastructure and the development of the Dube TradePort, we expect the number of business and employment opportunities in Durban to increase,” said Qatar Airways Group Chief Executive, His Excellency Mr. Akbar Al Baker, who will travel on board the inaugural Qatar Airways Boeing 787-Dreamliner on 17 December 2015.

“Durban’s prestige is recognised by the world-class events it has been chosen to host, further reinforcing the city’s strong and vibrant future as a global tourism destination,” added H.E. Mr. Al Baker.

Passengers to and from Durban will have the opportunity to enjoy award-winning Business and Economy Class service while travelling on a Qatar Airways Boeing 787, including up to 2,000 films, music titles and TV shows on Oryx One, the airline’s world-class inflight entertainment system. One of the newest aircraft in the Qatar Airways fleet, the Boeing 787, also known as the Dreamliner, accommodates 254 seats configured in two classes.

The new passenger service will complement Qatar Airways’ existing freighter services to Johannesburg. Qatar Airways Cargo, the world’s third largest cargo carrier, has been an active player in the development of the South African export business by connecting it with worldwide markets, via Doha.

The Doha – Durban schedules starting from 17th December 2015 are:

Qatar Airways is a member of the oneworld global alliance. The award-winning alliance was named the World’s Best Airline Alliance 2015 by Skytrax for the third year running. Qatar Airways was the first Gulf carrier to join global airline alliance,oneworld, enabling its passengers to benefit from more than 1,000 airports in more than 150 countries, with 14,250 daily departures.

This year, Qatar Airways launched Oryx One, an enhanced interface for its inflight entertainment system, increasing the number of movies and TV shows on board from 950 to up to 2,000. Passengers flying on Qatar Airways flights served by its B787, A350, A380, A319 as well as select A320 and A330 aircraft can also stay in touch with their friends and family around the world by using the five-star airline’s on-board Wifi and GSM service. 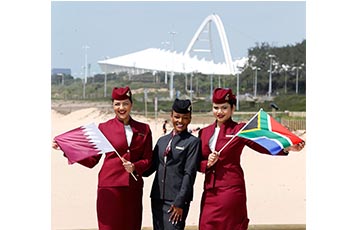