As the global launch customer of the Airbus A350, Qatar Airways is the first carrier to fly the aircraft to Europe, Asia and the Americas

DOHA, Qatar, 2015-12-8 — /Travel PR News/ — Qatar Airways today becomes the first airline to fly the Airbus A350 to the United States. The ferry flight left Hamad International Airport this morning at 0740 local time and will land in at JFK International at approximately 1400 local time. Qatar Airways was the global launch carrier of the A350 and is the first to fly the aircraft to three continents; the airline’s fleet of seven A350s currently flies twice a day to Frankfurt, double-daily to Munich and three times a day to Singapore from Doha.

An eighth A350 will join the fleet before the end of the year and is scheduled to fly daily to Philadelphia from January 1, 2016. As further A350s join the fleet throughout 2016, passengers will have the opportunity to experience this new-generation aircraft on flights to Boston launching on March 16, and the new second daily flight to New York from April 1 and Adelaide, Australia from May 2.

“We are proud to be the first commercial airline to land the Airbus A350 in the United States,” said Qatar Airways Group Chief Executive, His Excellency Mr. Akbar Al Baker. “As the global launch customer of this new-generation aircraft, we are excited to introduce it to the American market, where we will commence commercial flights from January 1, 2016 on our route from Philadelphia.”

“We are delighted that the A350 will bring its unbeatable economics and superior passenger comfort to another continent,” said Fabrice Brégier, Airbus President and CEO who will join the Qatar Airways celebrations in New York for this occasion. “The A350 is the aircraft of choice in its category and set to become a reference among passengers for its unrivalled cabin comfort and quietness.”

The Business Class cabin of the A350 has 36 seats in a 1-2-1 configuration featuring an 80-inch fully-flat bed and 17-inch HD in-flight entertainment screen. Economy Class features 247 18-inch wide seats in a 3-3-3 configuration, each with a 10.6-inch in-flight entertainment screen, and more space at shoulder level for passengers in window seats due to the vertical side wall panel design.

Qatar Airways’ A350 features the new Oryx entertainment system, with up to 2,000 entertainment options on individual screens in all classes. The jet also offers advanced air conditioning technology and LED mood lighting to enhance the comfort of passengers while reducing fatigue after a long flight. In addition, the jet also offers in-flight Wi-Fi connectivity for all passengers allowing them to surf the web on the go.

This year, Qatar Airways launched Oryx One, an enhanced interface for its inflight entertainment system, increasing the number of movies and TV shows on board from 950 to up to 2,000. Passengers flying on Qatar Airways flights served by its B787, A350, A380, A319 as well as select A320 and A330 aircraft can also stay in touch with their friends and family around the world by using the five-star airline’s on-board Wifi and GSM service. 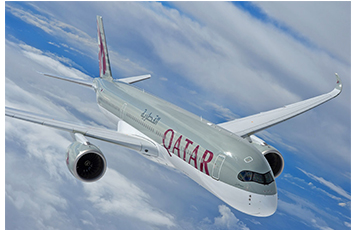 A Qatar Airways A350 in flight.