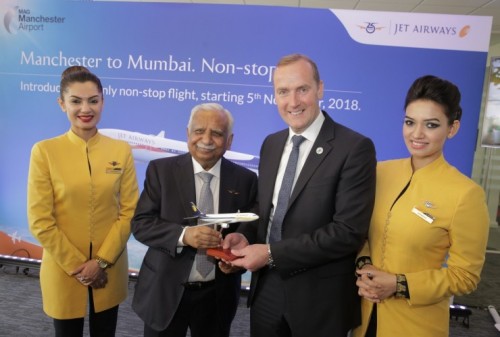 MANCHESTER, UK, 2018-May-22 — /Travel PR News/ — The North’s first ever direct flight service to India’s economic capital was today hailed a milestone in the UK’s relations with one of the world’s most important economies.

Jet Airways has announced it will begin flying from Manchester to Mumbai later this year, with the route tipped to deliver a major economic boost to the Northern economy.

The four-times-a-week service will put business and leisure passengers across Manchester Airport’s catchment area in easy reach of the world’s fastest-growing economy.

It will deliver a boost to the more than 500,000 people of Indian origin living across the North, with the service set to go live ahead of the annual Diwali festival.

And the route will open-up to the North to millions of Indian tourists, who will be attracted by its sporting cultural and natural assets.

The news has been welcomed by Secretary of State for International Trade.

International Trade Secretary, Dr Liam Fox said: “From Manchester to Mumbai, Jet Airways’ only direct route between the North of England and India will strengthen connections between two major global cities and the wider Northern Powerhouse. More than a hundred Indian companies are based in the North West alone and this route will further trade relations worth £18bn between the world’s largest and oldest democracies.

Jet will initially fly from Manchester to Mumbai on Monday, Thursday, Saturday and Sunday and will operate an A330-200, with 254 seats, on the route.

There are already more than 100 Indian companies with bases across the North and India is one of the UK Government’s top target markets for foreign direct investment.

News of a direct service is an early success for the Manchester-India Partnership (MIP), which was launched in both the UK and India earlier this year. It aims to further economic and cultural collaboration between the two locations and its launch was backed by Trade Minister Baroness Fairhead, Manchester’s inward investment agency MIDAS and the Confederation of Indian Industry (CII).

It is chaired by Manchester Airport CEO Andrew Cowan, who said: “Securing a direct service to one of India’s major cities is the product of a lot of hard work over a long period of time to forge closer ties between Manchester and this globally significant economy.

“We have worked, along with a range of partners, to create a compelling case for why our city – and the wider North – is a great place to visit, invest in and do business with.

“I am delighted Jet Airways have recognised this by launching what I’m sure will be a hugely popular service, mot least for the 500,000 people of Indian origin living across the North.

“Direct connectivity to the world’s most important markets is key to creating a prosperous and internationally competitive Northern economy, and a balanced and outward facing UK.

“This route will deliver a major boost to businesses looking to export to the world’s fastest-growing economy, as well as helping to attract Indian visitors and investors to the North.

“We look forward to working with Jet Airways on launching the Mumbai service in the months ahead.”

Vinay Dube, Chief Executive Officer, Jet Airways said: “We are extremely pleased to begin a new chapter in our decade-long relationship with the United Kingdom.

“The new service will bring Manchester into our global network, reinforcing our footprint as well as expanding the choice of connectivity to/from the United Kingdom for our guests with the four day/ week, non-stop service.

“With the new flight, Jet Airways will have over 8,000 seats on offer every week, making it increasingly convenient for both business as well as leisure travelers, travelling between India and the UK, deepening commerce as well as tourism ties between the two countries.”

Over the past three years, 10 different companies have invested in the North West, creating more than 100 jobs. They range from Bollywood post-production outfits to technology firms. The prospect of stimulating further trade in both directions has been welcomed by a range of senior figures.

High Commissioner of India to the UK, Mr Y. K. Sinha, said: “I am delighted that Manchester will be directly connected to Mumbai in November when Jet Airways commences operations on this sector.

“Both the cities are vibrant commercial hubs and a direct flight will not only promote tourism but also enhance our multifaceted engagement. With India emerging as the fastest growing large economy in the world and Manchester becoming an increasingly important tech and innovation centre, this new service will drive growth in the Northern Powerhouse by directly linking it with India’s commercial capital, further strengthening the Manchester India Partnership.”

Lord Jim O’Neill of Gatley, who coined the BRICs phrase to the refer to the high growth economies of Brazil, Russia, India and China, said: “Adding Manchester to Mumbai as a direct route, in addition to China a couple of years ago, shows once more, the pioneering leadership of Manchester Airport, opening itself and the whole Northern Powerhouse to the only two countries in the world with more than a billion people each, and with India, an economy that can probably see its GDP growth rates surpassing even those of China over much of the next 15 years.”

Mr Chandrajit Banerjee, Director General, Confederation of Indian Industry (CII), said: “CII has supported and facilitated the case for direct air route between India and Manchester. Therefore, this news is an important and very welcome step in increasing the business footprint of Indian industry in Manchester and surrounding regions in the North. Increased connectivity will strengthen the scope for greater economic collaboration. It will encourage Indian companies to explore the Northern Powerhouse for the establishment and expansion of their footprint in the region.”

Flights start 5th November with return economy fares from £400, and business class from £2,300.