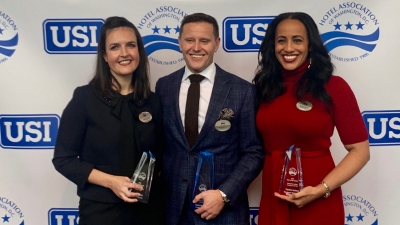 Washington, DC, U.S.A., 2019-Dec-18 — /Travel PR News/ — On November 22, 2019 The Hotel Association of Washington, DC (HAWDC) hosted their annual Stars of the Industry luncheon and awards ceremony, awarding the brightest Stars of the DC Hotel Industry. Four Seasons Hotel Washington, DC was honoured to be presented with three awards in the mid-sized hotel category, the first time that a hotel has won so many awards.

Toni Jackson, a key figure at BOURBON STEAK Restaurant since 2011. Toni was awarded Employee of the Year for all she brings to her role in BOURBON STEAK but also all that she has done for foster children in Washington, DC. Toni has been dedicated to increasing awareness but also adopted two of her own children and continues to foster a third.

“Toni exudes positivity and developed systems and plans that have taken the restaurant to the next level,” says BOURBON STEAK General Manager David Van Meerbeke. “Not only has she taken on a lot in her home, Toni has worked hand in hand with the entire staff at Four Seasons to raise money and awareness for the DC foster system.” Toni is an inspiration to everyone who works with her and her smile and warm sense of hospitality are a distinctive feature of BOURBON STEAK

Bozhena Bonchuk joined the Four Seasons family as a server at ENO Wine Bar in 2014 and quickly rose through the ranks through In Room Dining and Seasons, where Bozhena was an integral part of launching DC Tea and then, most recently back to ENO as Department Head.

“As a young female leader within the division it is inspiring to see how Bozhena coaches and guides the newer members of the team and is always willing to spend time getting to know them personally,” says Director of Food and Beverage Christian Storck. “Bozhena has a natural passion for developing and helping people and we are all encouraged when we see her passion for this. She brightens up every meeting with her subtle demeanour and excellent communication.

David Bernand first joined Four Seasons Hotel Washington, DC in the early 00s in Food and Beverage and worked his way up to Hotel Manager before moving on to other hotels in the company. In 2015, David came back to Four Seasons Hotel Washington, DC as General Manager and was then promoted to Regional Vice President in January 2019.  “David is a rare breed of leader. Extremely efficient and methodical, with the business acumen to manage an extensive portfolio, he is also very well liked and unanimously respected,” says Debra Silvi, Director of Marketing.  “What sets David apart is his kindness, compassion, loyalty, honesty and his integrity,” says Stacey Coppel, Director of People & Culture. David practices random acts of kindness and thoughtfulness in ways that are surprising and unique. One can also catch him rolling up his sleeves in the pastry department, helping the culinary team to perfect the recipe for pain aux raisins or assisting the maintenance department scrub the parking lot clean. In the words of Mary Hapner, David’s Executive Assistant, “David is not only an inspiration to his three sons and his wife, David is an inspiration to all of us who work with him.”

Four Seasons Hotel Washington, DC celebrated its 40th Anniversary this year and the entre team is excited to enter into its fifth decade with such a passionate and highly skilled team of people.