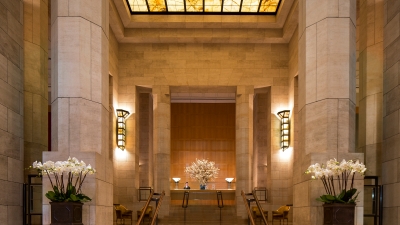 Located in the epicentre of Midtown Manhattan, the I.M. Pei designed Hotel sits steps away from luxury shops and boutiques on Fifth and Madison Avenues, Central Park and Rockefeller Center. It features 368 suites and studios; The Garden, a restaurant with a locally-sourced menu by Executive Chef John Johnson; and Ty Bar, an art-deco inspired space featuring custom barrels and classic cocktails. The Specialty Suite collection boasts an unparalleled level of residential living. Among them is the Royal Suite, Presidential Suite, Gotham Suite and the Ty Warner Penthouse. The Ty Warner Penthouse is the most expensive one-bedroom suite in the world priced at USD 50,000 per night. The Hotel also has a 24-hour fitness centre, L.RAPHAEL Beauty Spa and more than 15,000 square feet (1,400 square metres) of event space, including FIFTY7, a premier wedding venue designed by Pierre-Yves Rochon.

“We are humbled and honoured to receive the Forbes Five-Star Award again. This recognition means a lot to our dedicated team members,” says Rudy Tauscher, General Manager of Four Seasons Hotel New York. “They are the reason why we are such an iconic property in New York City. I can’t thank them enough for their commitment to excellence in service.”

Since opening in 1993, Four Seasons Hotel New York has continued to maintain superior service levels. The Hotel has more than 500 team members, many with the Hotel since its beginning. The concierge team is comprised of 12 Les Clefs d’Or members, more than any other hotel in New York City.