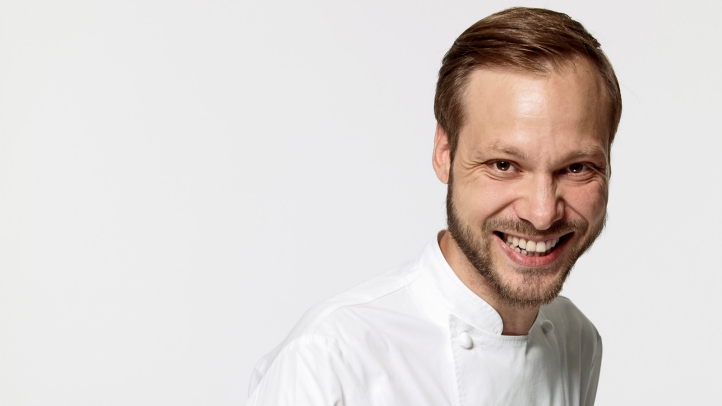 Talented and creative, Michael Bartocetti is above all a committed and responsible chef. He carefully chooses his suppliers, favouring small farms that promote sustainable and responsible agriculture. Driven by a desire to create authentic fresh flavours, Michael uses seasonal produce to craft desserts that are inspired by the natural world. He experiments with innovative flavours and techniques, resulting in perfectly prepared creations. Low in sugar, his pastry is gourmet and daring.

“Raw ingredients provide me with inspiration, triggering my imagination and kindling my desire to use them in my dishes. I use top quality produce, bringing out ingredients’ natural tastes and aromas to obtain delicate and harmonious flavours,” says Michael.

Immersed in the world of cooking from an early age, Michael spent much of his childhood in the kitchens of two family restaurants, working alongside his father who was head chef. He observed the cooks, taking in new aromas and scents, and learning about transmitting taste and flavour to each dish. Family friends who were pastry chefs shared their love for the world of pastry making. Michael soon knew he wanted to become a pastry chef.

Michael gained his first experience at Pâtisserie Fischer, a reputed pastry-shop in his native Lorraine. A finalist at the Best Apprentices of France competition, Michael decided to move to Paris to hone his pastry skills. He learned about the demands of working in a luxury hotel, and perfected his craft working for celebrated chefs such as Guy Savoy, Alain Ducasse at the Plaza Athénée and Christophe Moret at the Shangri-La, before joining the team of Four Seasons Hotel George V.

“Joining such a legendary luxury hotel, renowned all over the world for its unique culinary offering, is for me a great honour and source of pride. Our common values when it comes to sustainability, overall excellence, and sensitivity to clients’ tastes are just some of the reasons I am eager to take on this new challenge and express myself in the kitchen.”

As Executive Pastry Chef, Michael Bartocetti oversees the creation and execution of desserts at Le Cinq***, Le George* and L’Orangerie*. He is responsible for the Hotel’s entire bakery and Viennese pastry section, from the sweet creations available for afternoon tea at La Galerie to those served at private banqueting events.

“I look forward to working together with Christian Le Squer, Simone Zanoni and Alan Taudon to promote great cooking and strive to maintain Four Seasons George V, Paris the pinnacle of culinary excellence as the only luxury hotel in Europe home to three Michelin-starred restaurants.”