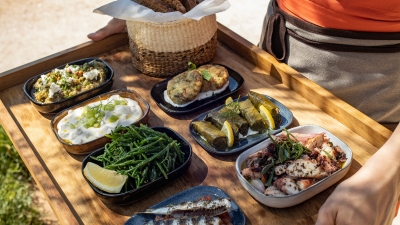 Guests of La Capitale can look forward to experiencing colourful and contemporary interpretations of traditional Greek cuisine at the hands of Chef Karinos, who invests in the quality of the raw ingredients and selects the finest produce from small family-run farms, such as artichoke, fava, Greek cheese, and wild greens.

Some of the dishes guests can expect include Taramosalata with white “Tarama” egg roe and caviar; Seabass Carpaccio with lemon, herbs, chili, bottarga, extra virgin olive oil; Calamari Salad with chickpeas, crushed wheat, cumin, marinated calamari and fresh spinach; Grilled Octopus; Lamb Chops; and for dessert a delicious Galaktoboureko, which is a custard orange flavoured cream, baked in the oven with traditional phyllo and syrup.

Rather than fuss over presentation, Chef Karinos focuses on respecting the products and flavour above all else.  He states, “I look forward to visiting Amman and introducing the valued guests of La Capitale to my cuisine, which can be described as an elevated twist of traditional and all-time favourite Greek recipes.”