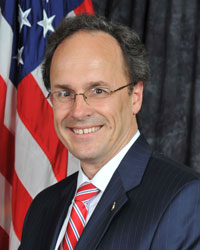 In the role, Hochul will manage the legal function for the company and provide advice and counsel to senior management in all legal matters involving Delaware North or its operating companies.

“William Hochul’s outstanding credentials, broad expertise and vast experience in the legal field make him a perfect fit for Delaware North,” said Co-CEO Jerry Jacobs Jr. “This is an incredibly important position for Delaware North, especially given our numerous regulatory and legal compliance requirements, our vast array of licenses and our global operations.”

Hochul has served in the U.S. Attorney position since 2010, when the U.S. Senate unanimously confirmed him after his nomination by President Obama. He managed a staff of more than 100 attorneys, paralegals, and support personnel while overseeing the prosecution of all federal criminal cases brought within the 17 counties of Western New York. His office also represented the United States in all civil matters brought within the district.

Hochul began his legal career as a law clerk to a Maryland Court of Appeals judge. He then joined the litigation section at the Washington office of a large international law firm, where he represented a wide variety of clients in complex civil litigation matters. He joined the U.S. Department of Justice in 1987 as an Assistant U.S. attorney for the District of Columbia before moving to the Western District of New York in 1991 in the same position. Hochul became chief of the office’s anti-terrorism unit following September 11, 2001, and chief of the national security division in 2006. He served as lead prosecutor in several high-profile international terrorism cases, including the highly successful prosecution of the internationally known Lackawanna Six, the first known instance of Americans traveling to train with al Qaeda.

Hocul has received numerous awards and recognition for his work, including co-recipient of the 2003 Attorney General’s Award for Exceptional Service – the highest award of the U.S. Department of Justice. He has also served as an adjunct professor at the State University of New York at Buffalo School of Law, Hilbert College and Niagara University.

About Delaware North
Delaware North is one of the largest privately-held hospitality and food service companies in the world. Founded in 1915 and owned by the Jacobs family for more than 100 years, Delaware North has global operations at high-profile places such as sports and entertainment venues, national and state parks, destination resorts and restaurants, airports, and regional casinos. Our 60,000 employee associates are dedicated to creating special experiences one guest at a time in serving more than 500 million guests annually. Delaware North has annual revenue of about $3 billion in the sports, travel hospitality, restaurants and catering, parks, resorts, gaming, and specialty retail industries. Learn more about Delaware North at www.delawarenorth.com.