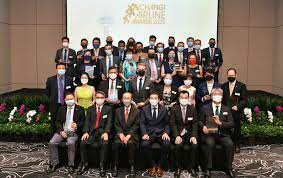 SINGAPORE, 2022-May-05 — /Travel PR News/ — In a resounding vote of confidence for Changi air hub’s recovery, more than 120 representatives from 71 airlines spanning 36 countries converged in Singapore for the annual Changi Airlines Awards (樟宜航空大奖) after a two-year hiatus.

The high-signature event, which celebrates the year’s achievements and recognises airline partners’ contributions to the Changi air hub, was last held in 2019 but suspended in the following years due to the Covid-19 pandemic.

A total of 34 awards across three categories were given during the three-hour evening event held at Dusit Thani Laguna Singapore. The Resilience Award was presented to 25 airlines who have continued to fly to and operate from Changi Airport throughout the pandemic. The Connectivity Award was presented to two airlines for launching new city links. Seven airlines were also conferred the New Airline Award from Guest-of-Honour Minister for Transport & Minister-in-charge of Trade Relations S Iswaran. (See Annex for complete list of recipients)

CAG also paid tribute to cargo partners in the Changi Cargo Partners Appreciation Ceremony held on 10 March for their contributions in 2021 towards the restoration of Changi’s air cargo network.

Passenger traffic at Changi Airport spiked from under 15% of pre-Covid levels in February this year to close to 40% in the last few days.

As at 1 May 2022, 82 airlines operate over 3,300 weekly scheduled flights at Changi Airport, connecting Singapore to some 125 cities in about 47 countries and territories worldwide. Click here for more details on Changi Airport’s Q1 Operating Indicators.