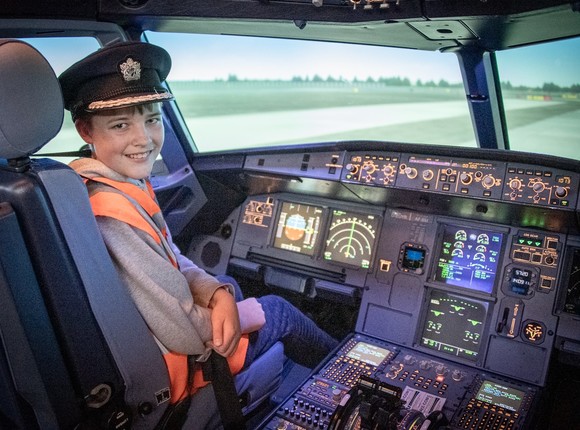 LONDON, UK, 2019-Dec-16 — /Travel PR News/ — British Airways stepped in to give two young aviation fans an early Christmas gift. The airline partnered with charity, Rays of Sunshine, to give the deserving youngsters a VIP tour of its state-of-the-art engineering and flight training facilities at London Heathrow.

Harvey McCulloch, a 16-year-old who is autistic and battling Hodgkin lymphoma, wrote to British Airways to say he dreamt of sitting in the flight deck of an A380 Super Jumbo aircraft.

Harvey was invited to British Airways’ state-of-the-art simulator hall and was joined by 12-year-old young carer, Sammy Austen-Jones. Sammy, whose mother suffers from life-threatening epilepsy, also wrote to the airline to say he dreams of becoming cabin crew.

Both youngsters took to the controls of an Airbus A320, sat in the flight deck of the A380 Super Jumbo and the B747 Jumbo Jet and learnt how to deliver a cabin safety demonstration.

Allister Bridger, British Airways’ Director of Flight Operations, said: “We loved giving Harvey and Sammy a tour of our Global Learning Academy. To be able to fulfil the dreams of two enthusiastic aviation fans, who have both shown incredible strength over a tough few years, was a wonderful privilege and we hope they apply for a role at British Airways in the future.”

The visit comes as part of the #BAMagic100 campaign, which sees the airline’s commitment to ‘100 Acts of Kindness’ in its centenary year. Since its launch in 2017, the campaign has seen the airline arranging surprise proposals, reuniting families, arranging money-can’t-buy experiences and creating holidays of a lifetime.

To find out more about the BA Magic campaign, please click here.