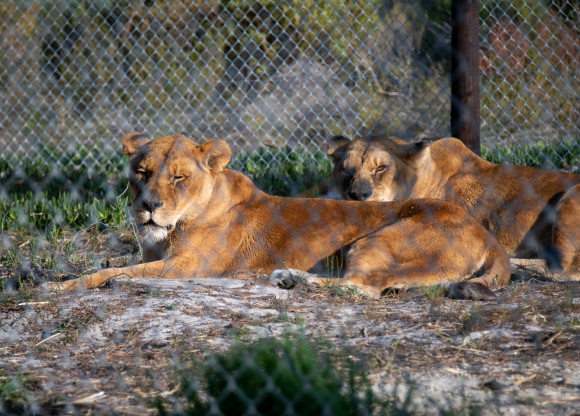 LONDON, UK, 2019-Nov-20 — /Travel PR News/ — British Airways Holidays has officially opened a new rescue enclosure at a big cat sanctuary in South Africa, as part of its joint vision with international animal welfare charity Born Free that all wild animals, whether living in captivity or in the wild, are treated with compassion and respect.

The enclosure is now home to two lionesses, named Alpha and Cora. The two neglected lionesses were initially rescued from a failed zoo in Spain and housed temporarily at Natuurhulpcentrum, a wildlife rescue centre in Belgium before they were flown to their new home.

Born Free’s Animal Welfare team and IAG Cargo’s animal transport team ensured that Alpha and Cora received specialist care and attention as they travelled to London and onto a British Airways flight to Cape Town. The lionesses then travelled a short distance by road before arriving at Panthera Africa Big Cat Sanctuary, a 40-hectare sanctuary in Stanford, South Africa. British Airways Holidays’ support has enabled the construction of a perimeter fence, night house and security provisions.

Alpha and Cora had been neglected and kept in cramped conditions at the zoo, which has since been closed following a raft of infringements. The new natural habitat at the enclosure allows the lionesses to live in the best conditions for the rest of their lives.

“We are delighted to have been able to support Born Free and enable Alpha and Cora to spend the rest of their lives in their natural habitat. We know our customers are behind us in supporting causes like this and we are proud that our new Animal Welfare Policy and its various initiatives will help improve the lives of animals living in captivity all over the world. This is a long- term commitment for us and the first of many projects that we’ll be supporting Born Free with. We look forward to developing this extremely important partnership.”

As part of the partnership, a new initiative, ‘Raise the Red Flag’ has been unveiled to help more animals like Alpha and Cora, by allowing members of the public to report captive wild animal welfare concerns, while equipping people with the tools to take action.

“It’s extremely gratifying to see how much Alpha and Cora have improved and are settling into their brand-new enclosure. It is virtually impossible to enable big cats brought up in horrific conditions in captivity to be released to the wild, so their new home will create an environment as close to their natural habitat as possible and encourage them to exhibit their natural behaviour. From a previous life in an unsuitable zoo environment, Alpha and Cora will now live the rest of their lives under excellent care.

“We are truly honoured to be working with Born Free to give Alpha and Cora a new home. We work to provide rescued big cats with a peaceful and safe home and as soon as we saw Alpha and Cora, we knew we wanted to help in any way we could. We are delighted that Alpha and Cora are now part of our pride.”

Further information on British Airways Holidays Wildlife Policy can be found at www.ba.com/animalwelfare

Further information on Alpha and Cora can be found here: https://www.bornfree.org.uk/news/alpha-cora

Further information on the Raise the Red Flag initiative can be found here: www.bornfree.org.uk/raise-the-red-flag

Operating in more than 40 markets around the world, British Airways Holidays supports the British Airways’ and One World Partner route networks by offering a range of holidays including hotels, car rental, transfers and sightseeing in over 500 destinations. Working closely with hotel and car rental partners, British Airways Holidays offers customers an extensive choice of holiday options, both into and out of the UK, at competitive prices.  All this is backed by an excellent customer service operation, which includes 24-hour support for customers when they’re abroad.

Born Free was founded by Bill Travers and Virginia McKenna, who starred in the movie classic, Born Free (1966), together with their eldest son, Will. Born Free’s mission is to ensure that all wild animals, whether living in captivity or in the wild, are treated with compassion and respect and are able to live their lives according to their needs. Born Free opposes the exploitation of wild animals in captivity and campaigns to keep wildlife in the wild.

Born Free promotes Compassionate Conservation which strives to enhance the survival of threatened species in the wild and protect natural habitats while respecting the needs of and safeguarding the welfare of individual animals. Born Free seeks to have a positive impact on animals in the wild and protect their ecosystems in perpetuity, for their own intrinsic value and for the critical roles they play within the natural world. For more information about Born Free please visit: www.bornfree.org.uk