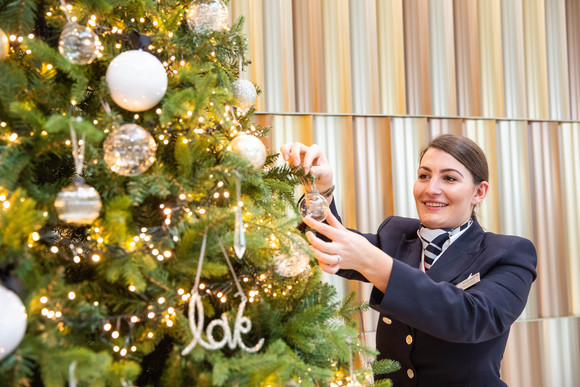 LONDON, UK, 2019-Dec-16 — /Travel PR News/ — British Airways is warming up for the great Christmas getaway, with more than one million customers flying with the airline over the festive period.

The most popular long-haul destinations are New York, Los Angeles, Johannesburg and Cape Town and this year’s busiest short-haul route is Paris, with many travellers opting to celebrate Christmas Day and New Year’s Eve in the French capital.

More than 210 British Airways flights will take to the skies on December 25 and 721 flights will operate on New Year’s Eve. The airline will deliver over 1.5 million bags across the network from now until December 27.

Customers will be able to enjoy a sky-high festive feast as the airline’s award-winning cabin crew will be serving over 100,000 traditional Christmas dinners which is made up of 450,000 brussels sprouts, 360,000 roast potatoes, and 11,000kgs of turkey. In addition, 135,000 mince pies will also be given out to customers.

The airline is also showcasing its largest ever Christmas themed inflight entertainment channel, that will feature nearly 50 hours of festive films, TV shows and audio. The festive favourites include Home Alone, The Holiday, Elf, Gavin & Stacey Christmas Special and the Nutcracker audio book.

Carolina Martinoli, British Airways’ Director of Brand and Customer Experience, said: “We’re proud to fly our customers to every corner of the globe to reunite them with friends and family during such an important time of the year. We hope they enjoy the Christmas touches we have brought to their flights – helping our customers and colleagues get in the festive spirit.”

British Airways colleagues will be spreading the holiday cheer, on the ground and in the air, by wearing Christmas jumpers and accessories, decorating aircraft and playing seasonal songs at 35,000 feet.

British Airways is investing £6.5 billion for its customers over five years, taking delivery of 73 new aircraft including A350 and 787s and refurbishing its long-haul fleet with new cabins. The airline is also introducing new redesigned lounges, new dining across all cabins, new bedding and amenity kits for First, Club World and World Traveller Plus and the best quality onboard WiFi to every aircraft. British Airways recently introduced its Club Suite, a new business class seat with direct aisle access on its A350 aircraft, which will be rolled out across the British Airways’ long-haul fleet over the next few years.