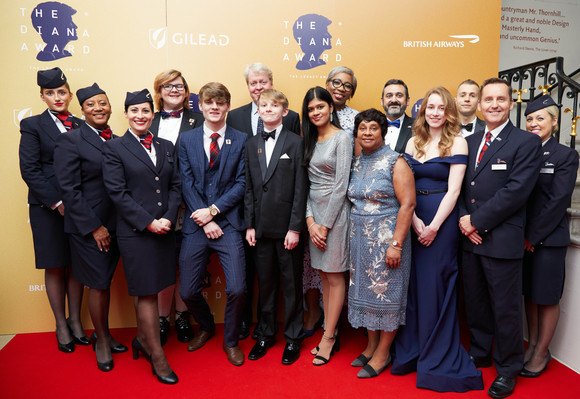 As the official travel partner, British Airways flew Diana Legacy Award winners from around the world to London for the bi-annual Legacy Award ceremony.

This unique accolade celebrates the achievements of 20 outstanding young leaders, visionaries and role models from across the world, who have demonstrated their ability to inspire and mobilise new generations to serve their communities.

Established in memory of Diana, Princess of Wales, and her belief that young people have the power to change the world for the better, The Diana Award aims to recognise and inspire the next generation of young leaders who are creating positive social change in their communities. It is one of the most prestigious accolades a young person aged 9-25 years can receive for their social or humanitarian work.

In addition to meeting with HRH Duke of Cambridge at Kensington Palace and being presented the award by Princess Diana’s brother Earl Spencer, the Legacy Award recipients will have access to a unique development programme. The programme aims to provide them with the opportunity to enhance their skills in four key areas; leadership, community development, social entrepreneurship and technology for good.

The winners were selected from a poll of nominations by an independent judging panel which included British Airways Chairman and CEO Alex Cruz, Baroness Lawrence OBE and Holly Branson.

Alex Cruz, British Airways Chairman and CEO, said: “We are delighted to have partnered with The Diana Award for the Legacy Award ceremony, as they continue their work in recognising incredible young people. British Airways is committed to having a positive impact in local communities in the UK and around the world, so we are proud to support projects and individuals who make a positive, lasting impact.

“Young people are a driving force for change so I’m very proud to have been on the judging panel for the awards, hearing about some inspiring achievements and championing the next generation of young leaders.”

Tessy Ojo, Chief Executive, The Diana Award, said: “This is a landmark event for The Diana Award as we celebrate our 20th anniversary year. This ceremony is about celebrating young people for their selfless contribution to society, their courage and bravery, and demonstrating to young people that we value them.  We’re incredibly grateful to British Airways as our travel partner, helping us bring all the young people together from around the world to celebrate their achievements and continue their development.

“We believe that valuing young people means investing in them so we are delighted that our Legacy Award recipients will have access to our unique development programme ensuring they continue to be positive trailblazers for their generation.”

About the Legacy Award

In 2017, to mark the 20th anniversary since the death of Diana, Princess of Wales and celebrate her life, The Diana Award launched The Legacy Award. Taking place every two years, this unique accolade celebrates the achievements of 20 exceptional young change_makers from across the world, who have demonstrated their ability to inspire and mobilise others to serve their communities, as Princess Diana herself.

About the charity – The Diana Award

The Diana Award was set up in memory of The Duke of Cambridge and Duke of Sussex’s mother, Diana, Princess of Wales, and her belief that young people have the power to change the world.

The charity fosters, develops and inspires positive change in the lives of young people through three key programmes which include; a mentoring programme for young people at risk, a youth-led anti-bullying ambassador campaign and a prestigious award which publicly recognises young people – The Diana Award.

Amidst the responsibilities of studying for her law degree, Victoria founded the One African Child Foundation to address the inequality in education. Having faced difficulties herself, Victoria understood the power of education in transforming lives, breaking the cycle of poverty and building peaceful and resilient societies. Through activity-based workshops on global citizenship education, life skills and peace building in violent communities, the One African Child Foundation has worked with and trained over 4,000 children from disconnected communities and provided mini grants to 25 young change makers across Africa. Victoria is youth representative of the SDG Education 2030 Steering Committee and is a strong voice for education both in Nigeria and globally.

Shomy is a Water, Sanitation, and Hygiene (WASH) Activist who has dedicated her life’s work to ensuring clean water and sanitation for all. After losing her mother to diarrhoea, Shomy realised how critical WASH is in saving lives. She turned her pain into purpose and reached out to vulnerable communities to raise awareness of different aspects of WASH among sexworkers, sewage workers, slum dwellers and underprivileged people. Her WASH Talks include sessions such as how to filtrate water at home, maintaining good personal hygiene, breaking the stigma around menstruation, proper hand washing techniques and food safety. Over the past 7 years she has benefited over 70,000 individuals through her WASH talks, ultimately saving lives.

Through television and radio stations, Erick reached over 6 million people, with antimicrobial ambassadors continuing to spread the message within their communities. His work has encouraged more people in health, agriculture and the community to pay more attention to the problem of antimicrobial resistance and their part in causing or addressing it.

Aditi is a passionate philanthropist and an avid volunteer in her community. Aditi dedicates her time volunteering at eight different social service communities. With over 10,000 hours of volunteering under her belt, Aditi dedicates her time to empowering young people, women and the elderly. As a result of her female empowerment work, Aditi was selected by the United Nations Association in Canada to serve as a youth delegate for the 63rd Commission on the Status of Women. She is currently serving as a peer mentor to adolescents who have disabilities, as well as those who are facing violence and abuse and is the founder of ‘My Empowerment Packs’, wellness kits for homeless youth within her community.

Madhav founded ‘Green the Gene’, an environmental club in school, when he was just 8 years old. Since then, he has inspired over 7,000 young volunteers to join the organisation and scaled it to one of the world’s largest completely youth-run environmental non-profits, with projects in 62 countries. He has raised over $1.1 million in funding over the last year to support Green the Gene initiatives and activities including innovative water filtration devices. Madhav is constantly developing technology and data intensive solutions tailored to address specific yet acute and immediate environmental crises faced by local communities, and particularly young people, across the world.

Kanchan is a passionate anti-poverty activist, women’s rights advocate and social entrepreneur. She serves as a UN Women’s Global Champion for Women’s Economic Empowerment and is the founder of youth-led social enterprise, Sustainable Fish Farming Initiative, which works with rural Nepalese women to combat extreme hunger and poverty. Kanchan has co-led the Youth Assembly at the United Nations’ Resolution Committee and worked extensively with youths, grassroots advocates, survivors of gender-based violence and human trafficking across South Asia. Kanchan is committed to inspiring and mobilising a new generation to serve their community, creating a world where nobody is uneducated or goes hungry, even for a single day.