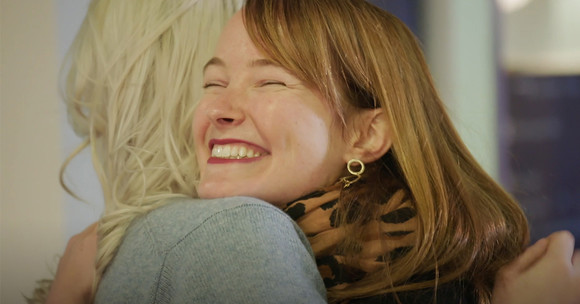 The airlines flew four siblings from London, Madrid, Los Angeles and San Francisco to be with their parents in Chicago ahead of the holiday.

Stephanie, 31, Joe, 30, Caralyn, 28 and Stephen, 24, were able to head home to surprise their Father, Jan Mezyk, whose health is unfortunately deteriorating and is unable to travel.

American Airlines and British Airways’ expert crew pulled out all the stops to get the Mezyk’s from all four destinations to the Windy City travelling in Club Europe with British Airways, and Flagship Business across the Atlantic and Domestic First in the U.S.

After surprising their parents at home, the extended family were served an exclusive Thanksgiving meal in their hometown at Bistronomic restaurant. A video, capturing the touching moment Dad, Jan and Mum, Katie, found out all their children were home together, is available to view here:

Caralyn, said “We are all so overwhelmed by the efforts made by British Airways and American Airlines to get us back to Chicago for the holidays. My Mum and Dad had absolutely no idea and weren’t expecting any of us to make it home, so for all four of us to be back together was incredibly emotional for them. We were given the VIP treatment from the start and the whole experience is something we will never forget. After being apart for so long, it was wonderful to just be together.”

Neil Chernoff, British Airways’ Director of Networks and Alliances, said: “Bringing people together is something British Airways and American Airlines do every day, but it’s even more important over Thanksgiving and Christmas. The teams often go to great lengths to create memorable journeys, so we hope that the Mezyk family have their best holiday season yet.”

Vasu Raja, American Airlines’ Senior Vice President of Network Strategy, said: “Caring for people on life’s journey is what we do at American, alongside our Atlantic Joint Business Partners. On behalf of our 130,000 team members across the globe, we were delighted to be able to care for the Mezyk family, and all the other families who entrust their travel plans to us during the Thanksgiving holidays.”

American Airlines, British Airways, and Iberia formed the transatlantic joint venture in 2008, with Finnair joining in 2013, to widen their options across Europe and North America in order to offer customers the most competitive choice.  The partnership brings together their networks of flights and offers customers a choice of over 140 transatlantic flights a day, with approximately 75 flights a day from London to the USA and 102 nonstop flights from North America to Europe.

Since 2013, American has invested more than $28 billion in its product and people and now ies the youngest eet among U.S. network carriers, equipped with industry-leading high-speed Wi-Fi, lie-at seats, and more inight entertainment and access to power. American also has enhanced food and beverage options in the air and on the ground in its world-class Admirals Club and Flagship lounges. American was recently named a Five Star Global Airline by the Airline Passenger Experience Association and Airline of the Year by Air Transport World.

American is a founding member of oneworld®, whose members serve 1,100 destinations in 180 countries and territories. Shares of American Airlines Group Inc. trade on Nasdaq under the ticker symbol AAL and the company’s stock is included in the S&P 500. Learn more about what’s happening at American by visiting news.aa.com and connect with American on Twitter @AmericanAir and at Facebook.com/AmericanAirlines.

British Airways is the UK’s largest international airline offering more than 45 million customers a year quality, choice and convenience. Its principal place of business is London, with a significant presence at Heathrow, Gatwick and London City airports.

Operating one of the most extensive international scheduled airline route networks together with its joint business agreement, codeshare and franchise partners, British Airways flies to more than 200 destinations in almost 80 countries on a fleet of around 300 aircraft. The airline is investing £6.5bn over the next five years in new aircraft, new cabins, new lounges, new food and new technology – including industry-leading WiFi.

British Airways is a founding member of the airline alliance oneworld®, which serves some 1,000 destinations across the globe.