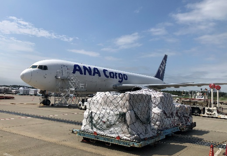 “Our goal is to create a more sustainable society, while helping our local communities and enhancing corporate value and we have dedicated this aircraft to help promote these efforts”, said ANA President and CEO, Shinichi Inoue. “Utilizing the technological advances currently available and investing in new solutions, ANA is working hard to create a safe, efficient and sustainable operation.”

Founded in 1952 with just two helicopters, All Nippon Airways (ANA) has grown to become the largest airline in Japan. ANA HOLDINGS Inc. (ANA HD) was established in 2013 as the largest airline group holding company in Japan, comprising 70 companies including ANA and Peach Aviation, the leading LCC in Japan.

The airline’s legacy of superior service has helped it earn SKYTRAX’s respected 5-Star rating every year since 2013, with ANA being the only Japanese airline to win this prestigious designation for nine consecutive years. ANA also has been recognized by Air Transport World as “Airline of the Year” three times (2007, 2013 and 2018); it is one of only a select few airlines to win this prominent award multiple times.