HONG KONG, 2015-9-30 — /Travel PR News/ — Airport Authority Hong Kong (AA) today announced the revised financial arrangements for developing the three-runway system (3RS) at Hong Kong International Airport (HKIA), including the new proposed level of airport construction fee. The AA said 70% of departing passengers will pay a fee of HK$90 or below, a large reduction from the originally proposed HK$180. The AA will also issue retail bonds for the general public to have the chance to benefit from the funding arrangement of the 3RS.

The Executive Council affirmed the need to expand HKIA into a 3RS this March and suggested that the AA to further adjust the project’s financial arrangements, including reducing the originally proposed airport construction fee. Following the financial study carried out by the AA and its consultant, the Government reported the relevant arrangements to the Executive Council today.

The financial arrangements for the 3RS will continue to be based on the “joint contribution and user-pay” principle. Funding will be provided through three channels: bank loans and issue bonds, retaining HKIA’s operational surplus for project investments, and charging an airport construction fee to departing passengers.

Fred Lam, Chief Executive Officer of the AA, said, “The Airport Authority has strictly followed prudent commercial principles in preparing the financial arrangements for the 3RS. We have considered a number of factors, including the effects on the AA’s credit rating and finances, the additional cost imposed on passengers, and maintaining HKIA’s competitiveness as a hub airport. We have also consulted with different stakeholders, including local airlines and the travel industry, and conducted passenger surveys to understand the views of local residents, visitors, and transit and transfer passengers regarding the level of airport construction fee.”

Under the revised structure, 70% of passengers departing from HKIA will pay HK$90 or less for the airport construction fee. Following its implementation, charges at HKIA will remain at a low level, which is lower than many Mainland Chinese and Asian hub airports to maintain competitiveness. The AA will begin levying the proposed airport construction fee once all the statutory gazettal processes for the 3RS have been completed, and it will remain in effect until all the related borrowings of the 3RS have been returned.

Mr Lam added, “Because the AA is reducing the airport construction fee, we need to increase borrowings from other sources. The current proposed borrowing level has been increased from HK$53 billion to HK$69 billion, which accounts for about half of the overall construction expenses.

“Based on prudent commercial principles, we should strive to maintain the AA’s good credit rating in order to obtain cost-effective finances. The current borrowing ratio in the revised financial arrangement is close to the maximum level that will allow us to maintain a good credit rating. We are considering adopting various financial tools to help us meet construction expenses, including issuing retail bonds and Islamic bonds. Issuing retail bonds will give the interested general public the chance to participate in the construction of the new HKIA, which as always will belong to the people of Hong Kong.” 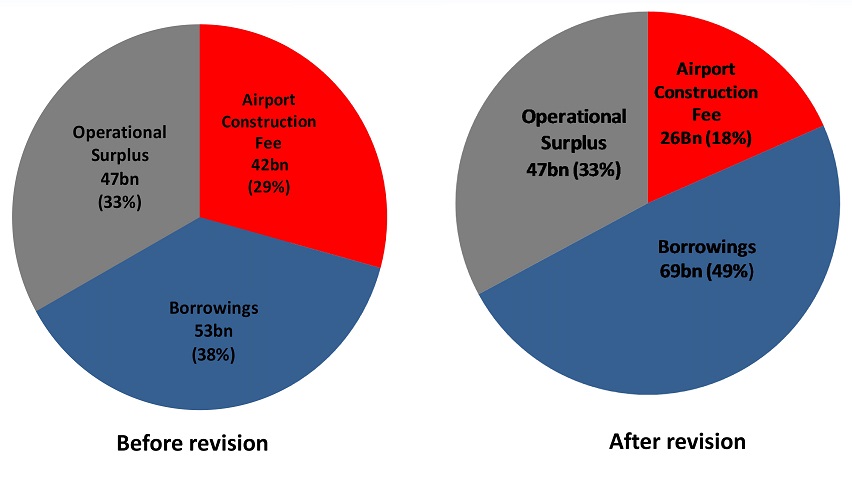 – The proposed airport construction fee will be levied once all the statutory gazettal processes of the 3RS have been completed, and will remain in place until all the borrowings of the 3RS have been returned
– The airport construction fee will be reviewed according to the financial status of the AA after the 3RS starts operations in full
Aggregate Airport Charge

– In the most recent “Aeronautical Charges Benchmarking Study” conducted by UK independent consultant LeighFisher, which was appointed by AA, in 2014, HKIA ranked 55th out of 56 major international major airports in terms of aggregate charge (where a lower ranking means lower airport charges).
– After the implementation of the proposed airport construction fee of HK$90 (for departing short-haul passengers flying economy class), HKIA’s ranking in aggregate charge will be 45, which remains lower than many Mainland and Asian hub airports.