“In the period 2009-2011, we witnessed considerable improvement in Air China quality standards, which resulted in the airline achieving 4-Star Airline status in June 2011”, said Edward Plaisted of Skytrax. “However, during 2013 we have continued to observe an increasing level of quality inconsistency across both airport and onboard services, which allied to some cuts in product quality mean that Air China is no longer meeting the required targets for 4-Star Airline status.”

The Civil Aviation Administration of China (CAAC) exerts effective control over Air China, and since the end of 2012 the CAAC has been directing emphasis to improve cabin safety standards of Chinese airlines, with the subsequent impact on passenger service standards reflecting a fall in Air China quality consistency. At the time, CAAC commented that some airlines in China were “not ready” to deliver good quality onboard service to customers, and their priority was to focus on improving cabin safety standards.

“Safety and punctuality issues are clearly a priority in the domestic China market” added Plaisted, “but despite new safety regulations imposed on Chinese airlines we are pleased to see other key performers such as Hainan Airlines (a 5-Star Airline) and China Southern Airlines (a 4-Star Airline) maintaining service and product standards to a world-class standard.

Despite being the flag-carrier of China, further progress and change is needed for Air China to internationalise its service and product. From a global perspective, the brand awareness does not reflect that this is an airline carrying over 70 million passengers with a fleet of some 300 aircraft.

“One has to concede that the rapid growth in domestic air travel across China presents many challenges to the airlines and the governing aviation body. In a period of just a few years, there are millions more Chinese people travelling by air for the first time, and this brings with it a need to educate these customers in the formalities, regulations and procedures that need to be adhered to,” say Skytrax.

In a bid to make air travel more affordable to Chinese people, the Civil Aviation Administration of China is expected to change rules so that airlines no longer have to adhere to minimum ticket prices on domestic flights in China. This say Skytrax will result in growing new consumer demand, but has to be viewed with caution due to the fact that available airspace for commercial airlines in China remains below 33%, with most under military control. This contributes to an increasing problem of flight delays. Beijing recently had one of the worst global airport timeliness ratings with up to 82% of flights delayed at one point. Shanghai did not perform much better, with up to 71% of flights delayed. 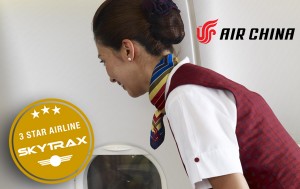