Since being acquired in 2006, Baymont has more than tripled in size and, at 410 hotels strong, continues to grow exponentially. Recent milestone openings, including its 400th hotel and first hotel in Mexico, marked an unprecedented 2015 and landed Baymont on Entrepreneur Magazine’s Top Fastest Growing Franchises of the Year in 2016.

“Baymont is no longer the underdog the industry once thought it was,” said Greg Giordano, the brand’s vice president of operations. “We’ve defied the odds by growing steadily for a decade, proving that welcoming service is timeless. I’ve been with Baymont every step of the way and I know, as do our owners, that this brand has staying power.”

The momentum continues in 2016 thanks to record growth – more than 50 hotels joined the brand in 2015 alone – and an interior prototype design that contains elements of community while offering cost efficiencies for owners. Baymont has more than 40 hotels already in the pipeline for 2016 and plans to open new construction hotels under the prototype design in Midland, Texas and Long Island City, New York later this year.

With hotels in 43 states, Baymont is on a quest to conquer its homeland while expanding across borders. The brand has set its sights on the remaining 7 states (Alaska, Hawaii, Maryland, Maine, Massachusetts, Oregon and Rhode Island), and is looking forward to further expansion in Canada later this year.

“My first Baymont property was a conversion property from AmeriHost when Wyndham Hotel Group merged the two brands – back then I was probably the last guy that wanted to be become a Baymont because it was a small, unknown brand, but I’m glad I made the right decision,” said Ketan Patel, owner of the Baymont Inn & Suites Muskegon, in Muskegon, Michigan. “Over the last 10 years my family has grown to a handful of properties and Baymont is always our first choice.  I see myself growing even further with the brand over the next 10 years.”

Baymont has cornered the market on genuine, old-fashioned service, coining a culture of ‘hometown hospitality’ aimed to make guests feel like they’re in familiar territory when they’re away from home. Many Baymont owners and their employees are true hometown hoteliers, residing in the very same communities where their hotel is located.

“Our hotels are mostly in small towns where most of our team members have lived for years. They are proud to be part of the hotel and proud to represent a brand like Baymont in their hometown to guests from all over the world,” said Tony Maness, vice president of Channel Point, which operates 16 Baymont hotels.

Acquired in 2006, Baymont Inn & Suites was originally established in Oshkosh, Wisconsin, as an economy brand under the name ‘Budgetel.’ After a series of evolutions, the brand inched out of its segment and was re-positioned as midscale under the name Baymont Inn & Suites, meaning ‘from the bay to the mountains.’ The name reflected a lofty ambition for a brand which at the time was confined to the Great Lakes region of the U.S. With Wyndham Hotel Group, the 126-hotel brand grew exponentially thanks to a merger with the former AmeriHost brand, adding more than 50 hotels in a span of three years, and steady, progressive growth ever since.

About Baymont Inn & Suites
Part of Wyndham Hotel Group, the Baymont Inn & Suites® hotel brand is a chain of more than 400 midscale hotels located throughout the United States and in Mexico that takes pride in neighborly hospitality. Many locations feature free Wi-Fi, continental breakfast at the Baymont Breakfast Corner®, swimming pools, fitness centers, airport shuttle service and the opportunity to earn and redeem points through Wyndham Rewards®, the brand’s guest loyalty program. Travelers can join the free program at www.wyndhamrewards.com.

Each Baymont Inn & Suites hotel is independently owned and operated under a franchise agreement with Baymont Franchise Systems, Inc. (BFS), or its affiliate. BFS is a subsidiary of Wyndham Hotel Group, LLC and parent company Wyndham Worldwide Corporation (NYSE: WYN). Reservations and information are available by visiting www.baymontinns.com.

Wyndham Hotel Group is the world’s largest hotel company based on number of hotels, encompassing over 7,800 properties and 678,000 rooms in 72 countries. Additional information is available at www.wyndhamworldwide.com. For more information about hotel franchising opportunities visit www.whgdevelopment.com. 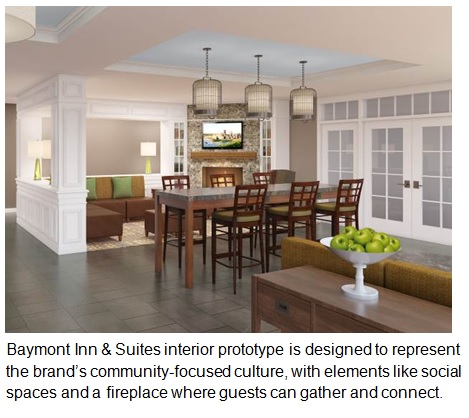