Based in Zhejiang province, Wanfeng Auto Holding Group is a large private joint-stock enterprise with businesses in automotive parts, machinery, financial investments, as well as alternative energy and materials.

Guan Dongyuan, Senior Vice President of Embraer and President of Embraer China, said: “It is an important milestone to have Wanfeng as the launch customer of Phenom 100E in China. It reflects Wanfeng’s trust not only in Embraer Executive Jet products, but also in our Customer Support and Services. The Phenom 100E will help Wanfeng optimize its fleet structure and bring Wanfeng more business opportunities in the future.”

“It’s a great honor to receive the first Phenom 100E in China,” said Chen Bin, President of Wanfeng. “After comprehensive studies of executive jets in the same class, we chose the Phenom 100E, as it ideally meets our demands with its appealing features such as plenty of space, fast speed, and low fuel consumption.”

About the Phenom 100E
The Phenom 100E has a four-occupant range of 1,178 nautical miles (2,182 km), with NBAA IFR reserves. With a high-speed cruise of 390 knots, the Phenom 100E is one of the fastest jets in its class, with operating costs comparable to that of leading turbo-prop aircraft. The Phenom 100E also features multi-function spoilers, and the aircraft is capable of flying at 41,000 feet (12,500 m), powered by two Pratt & Whitney Canada PW617F-E engines with 1,695 pounds of thrust each.

About Embraer Executive Jets
Embraer is one of the world’s leading executive jet manufacturers, having entered the business aviation market in 2000 with the Legacy jet, which led to the launch of Embraer Executive Jets in 2005. Its portfolio, the broadest in the market, consists of the entry-level Phenom 100E and the Phenom 300 light jet, the Legacy 500 midsize and Legacy 450 mid-light, the super-midsize Legacy 600 and large Legacy 650, and the ultra-large Lineage 1000E. Completing 10 years in the market, Embraer Executive Jets’ global fleet exceeds 930 aircraft, which are in operation in more than 60 countries and are supported by the Company’s global Customer Support and Services network of about 75 owned and authorized service centers, complemented by a 24/7 Contact Center, at its headquarters, in Brazil. For more information, please visit www.embraerexecutivejets.com. 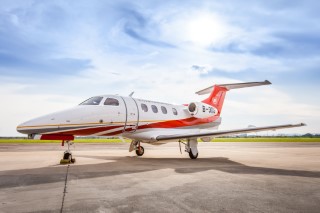