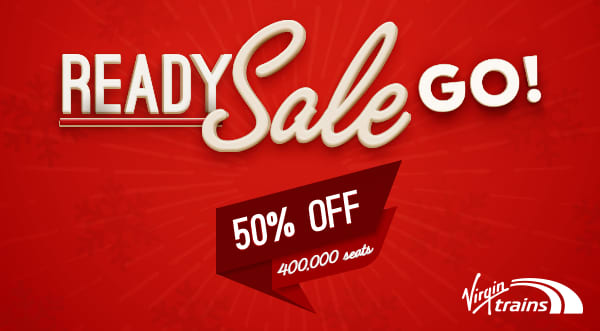 LONDON, 2017-Jan-10 — /Travel PR News/ — Missing the Christmas break already? Plan your next staycation and take advantage of discounted tickets in Virgin Trains’ New Year seat sale, starting on Monday January 9 and finishing on Friday January 13. Half price offers on four hundred thousand tickets will be available for travel between January 30 and March 31 2017* on both Standard and First Class tickets across the whole east coast route.

From stunning architecture in Edinburgh, to the rich tapestry of history in York, you can get to these and many more destinations along the route in style and comfort for less. Half price fares include the below Standard Advance Single tickets:

And the below First Class Advance Single tickets:

David Horne, Managing Director at Virgin Trains on the east coast, said: “New Year is the perfect time to plan your next getaway and our fantastic deals offer our customers the chance to buy discounted tickets to any of the great destinations on our east coast network. Not only can our customers take advantage of these super savings, they are also able to travel in style on one of our newly refurbished trains, which feature stylish new interiors and a touch of Virgin glamour for added comfort.”

Half price tickets will be available to book from 10am on Monday, January 9 2017, only at virgintrainseastcoast.com/sale and trainline.com/SeatSale

About Virgin Trains:
Stagecoach and Virgin are working in partnership to operate the East Coast and West Coast inter-city routes under the Virgin Trains brand. Together, they are on track to revolutionise rail travel across the UK.

On the East Coast route, £140m is being invested to create a more personalised travel experience. We have already invested £21m to completely revamp our existing fleet and customers can now benefit from 42 additional services (22,000 extra seats) per week between Edinburgh and London. 2018 will see the introduction of completely new Azuma trains being built in the UK by Hitachi.