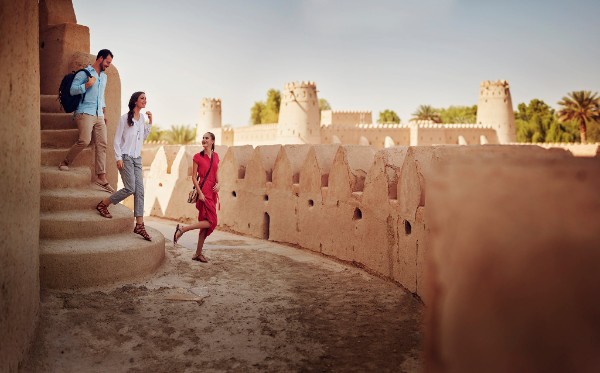 The PATA Adventure Travel and Responsible Tourism Conference and Mart 2018 is a three-day niche event with both conference and travel mart components, bringing together public and private sector tourism professionals involved in adventure travel and responsible tourism. Key elements of this annual event are environmental protection and social sustainability with special focus on empowerment of local communities. This is the first Pacific Asia Travel Association (PATA) event to be held in the UAE and the only event to be staged in West Asia in the last 14 years.

“This is a fantastic opportunity for PATA members and for the adventure travel sector at large. Al Ain is a truly fascinating destination with a wealth of culture, heritage and opportunities for adventure travel,” said PATA CEO Dr. Mario Hardy. “Connectivity is easy via the award-winning Abu Dhabi International Airport. Al Ain, together with the surrounding landscape, has so much to offer travellers of all ages. This event provides an exceptional platform for travel trade professionals to learn much more about this compelling city and region.”

Commenting on the selection of Al Ain to host the event, HE Saif Saeed Ghobash, Director General of Abu Dhabi Tourism & Culture Authority, the government body responsible for the promotion of the emirate said: “Abu Dhabi has experienced significant growth in guest arrivals from countries within the PATA region in recent years, especially from India and China, and since joining the association we have been working with PATA members to place greater emphasis on seeding growth in visitor arrivals from these priority source markets.

“Over the past few years, Abu Dhabi has built up a successful track record in hosting and securing international meetings, including annual congress meetings from international travel associations. Delegates attending the PATA Adventure Travel and Responsible Tourism Conference and Mart 2018 in Al Ain will enjoy the diversity of mountain, desert and oasis landscapes and exhilarating adventure attractions, all complemented by rich historical sites, a state-of-the-art conference centre and outstanding hotels of all categories,” he added.

Al Ain is known as the heritage heartland of the Emirate of Abu Dhabi. The city has become an increasingly popular business events destination, boasting 18 hotels and hotel apartments with over 2,000 rooms and dedicated facilities at the Al Ain Convention Centre.

Located at an important historical crossroads of trade, different locations in Al Ain are now classified by UNESCO as World Heritage Sites, including its six oases and the archaeological sites of Hafeet, Hili and Bida bint Saud. Al Ain oasis – with its cool, shady walkways and a 3,000-year-old falaj irrigation system – is the first component of the UNESCO World Heritage site to open to the public,

Al Ain city abounds in picturesque forts, including one of the United Arab Emirates’ most historic and picturesque buildings, Al Jahili Fort, erected in 1891 to defend the city and protect precious palm groves;  Qasr Al Muwaiji, a world-class museum and birthplace of HH Sheikh Khalifa bin Zayed Al Nahyan, President of the UAE; Al Ain Palace Museum, the former home of the late UAE founder, Sheikh Zayed Bin Sultan Al Nahyan and the redeveloped Al Qattara Fort which is now home to a brilliant arts centre and gallery. Visitors can also immerse themselves in the city’s rich culture and heritage with a visit to Al Ain National Museum which displays various aspects of UAE life, including archaeological finds, Bedouin jewellery and traditional musical instrument collections.

The city skyline is dominated by the dramatic rocky heights of Jebel Hafeet. Rising to a height of 1,240 metres, this is the Emirate’s highest peak and the second highest in the UAE. With the mountain as a backdrop Al Ain Zoo’s man-made African safari also features the Sheikh Zayed Desert Learning Centre and a dedicated mini-museum with galleries of interactive, immersive, and informative exhibits exploring themes of environmental and species conservation.

Visitors can also take a trip to Wadi Adventure, the region’s only man-made white water rafting, kayaking and surfing facility built in the foothills of the majestic Jebel Hafeet. The park’s 3.3 metre man-made surf wave is the world’s largest and its 1.7 kilometre kayaking channel network is the world’s longest. For a taste of the fast track, Al Ain Raceway features a 1.6 km go-kart circuit.

The PATA Adventure Travel and Responsible Tourism Conference and Mart is an annual event that offers a platform for sellers and buyers involved in the world of adventure travel and responsible tourism to secure new business and to consolidate existing contracting relationships via PATA’s well-proven system of pre-matched appointments. It is an excellent opportunity to create new experiences and to share new opportunities with global tourism professionals.

For more information or to register for the event, please email ATRTCM@PATA.org.

Founded in 1951, the Pacific Asia Travel Association (PATA) is a not-for-profit association that is internationally acclaimed for acting as a catalyst for the responsible development of travel and tourism to, from and within the Asia Pacific region. The Association provides aligned advocacy, insightful research and innovative events to its member organisations, comprising 98 government, state and city tourism bodies, 21 international airlines, airports and cruise lines, 68 educational institutions, and hundreds of travel industry companies in Asia Pacific and beyond. Thousands of travel professionals belong to the 40 local PATA chapters worldwide. The chapters organise travel industry training and business development events. Their grassroots activism underpins PATA’s membership of the Global Travel Association Coalition (GTAC), which includes ACI, CLIA, IATA, ICAO, WEF, UNWTO and the WTTC. The PATAmPOWER platform delivers unrivalled data, forecasts and insights from the PATA Strategic Intelligence Centre to members’ desktops and mobile devices anywhere in the world. PATA’s Head Office has been in Bangkok since 1998. The Association also has official offices or representation in Beijing, Sydney and London.