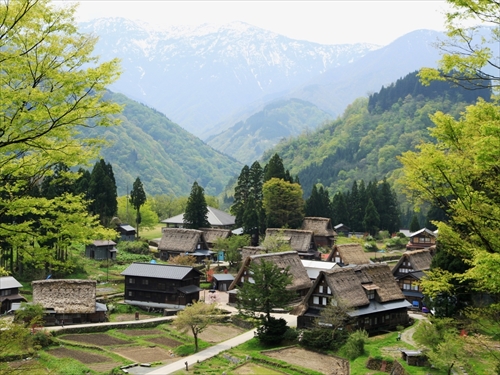 LONDON, 2021-Jan-13 — /Travel PR News/ —Spread across five cities and running through four prefectures, the Three Star Road cuts through the Japanese Alps boasting a wealth of tradition and culture as well as stunning wildlife and nature. The area is now easier than ever to explore with a special hop-on hop-off ticket option.  The ticket allows visitors to travel to national treasures and World Heritage Sites in Kanazawa, Shirakawa-go and Matsumoto such as Kenrokuen Garden, the historic village of Shirakawa-go, the old town of Takayama and Matsumoto Castle, which have all been awarded three stars by the Michelin Green Guide to Japan.

Ticket options are offered by JR EAST, and worK well for a one-way trip from any one of the following stops; Kanazawa, Shini-Takaoka and Toyama, through to Matsummoto and, vice versa. This ticket is a great add-on to buy for those who are already travelling to Kanazawa or Nagano by Hokuriku Shinkansen. See below for the ticket route along with our guide on what not to miss along the way:

Due to both hot and cold currents meeting in the local water off the coast of Ishikawa, Kanazawa enjoys extremely high quality seafood. Those who head down to Ohmi-cho market can purchase the freshest fish and have it cooked in front of them. Additionally, perfect for desert, Kanazawa city is famed for having some of the best sweets in Japan including Dorayaki, a sweet bun and fuku-usagi, a Japanese-style rice cake shaped like a rabbit. Both are filled with ‘anko’, a traditional confectionery paste made from soybeans.

Historically known for having skilled artisans, Nanto City is a haven for craft lovers. Modelled after a Buddhist temple of the same name, the Inami Carving and Sculpting Centre houses over 200 works of the finest Inami wood carving technique. Whilst in Nanto City visitors can stop by the Washi Taiken Kan and try their hand at making traditional Japanese paper goods including post cards and fans as a keep safe for when they get home.

Shirakawa Village is busiest in the colder months, when the quaint, hut-filled village of Ogi-machi is covered in a blanket of snow. During January and February the village holds illuminations, making it one of the most picturesque spots during the winter. Visitors can even stay in a traditional Japanese farmhouse warmed by an Edo-period fireplace. Lodgers stay in rooms paved with woven, tatami mat flooring and are treated to dinner and breakfast which feature the local cuisine. Shirakawa Village is also an excellent place to visit outside of the winter months. There is a lot to do in spring and summer, as the nearby Hakusan National Park spans nearly 500km², offering walking paths, hiking trails and camping grounds.

History and nature in Takayama City

Combining the traditional styles of both Edo and Kyoto, Takayama City satisfies any visitor’s need to immerse themselves in Japanese history. Takayama has preserved many of the townscape’s historical features such as its overhanging roofs and projecting lattices, giving visitors a feel for what life was like in Edo period Japan. At the base of Mount Norikura, the vast Goshikihara forest offers stunning visuals of animals, waterfalls and greenery. Treks are encouraged and guided tours are available by reservation. Adding to an all round experience, before leaving, meat lovers should try the famous nigiri beef sushi which is made using A5 grade Hida beef, a high class variety of Wagyu, comparable with the world-known Kobe beef.

Matsumoto City personifies Japan’s motivation to fuse tradition with modern influence. The Matsumoto City Museum of Art showcases various types of contemporary and modern art, with its most popular attraction being the permanent works Yayoi Kusama. Kusama was born in 1929 in Matsumoto and is internationally known for her hallmark bright and vivid polka dot pieces that include one of her most famous works, Pumpkin, on Naoshima Island in Kagawa Prefecture. As visitors approach the Matsumoto City Museum of Art, they are greeted by a psychedelic installation of giant, twisting tulips and the museum’s polka-dotted facade – a small taste of what awaits inside.

Whether your interests revolve around crafts or exploring the outdoors, the Three Star Road is sure to exceed expectations. Take advantage of Hokuriku Shinkansen and the Three-Star Route option ticket and enjoy experiencing the real Japan.

Where to purchase a ticket

Note that this ticket is not valid for a round trip or for turning back halfway.

“Mitsuboshi Kaidou” Three-star Road is part of the Nostalgic Route of Shoryudo, which is included in Michelin Green Guide Japan as a three-star tourist attraction. One of the greatest sightseeing routes in Japan, it includes Kenrokuen Garden in Kanazawa, the historical townscape of Takayama, thatched-roof houses in Gokayama and Shirakawago, designated as a World Heritage Site, and Matsumoto Castle, a national treasure.  For more information, please visit https://www.mitsuboshi-kaidou.com/