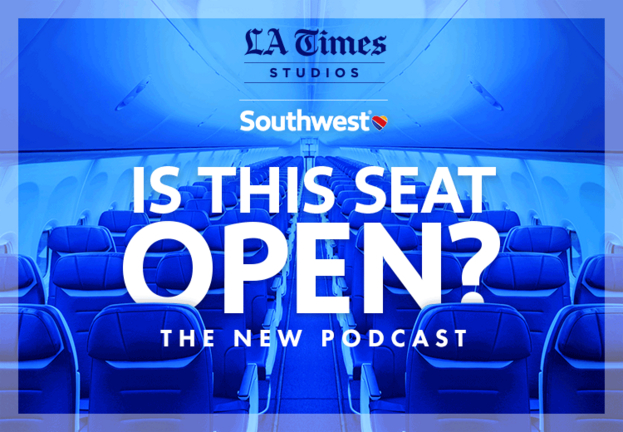 Southwest Airlines teams up with L.A. Times Studios and At Will Media to create its first podcast series, “Is This Seat Open?”

“As we look back on 50 years of Southwest Airlines, our world and our industry have changed significantly, but what has remained constant is the Heart demonstrated by the People of Southwest,” said Linda Rutherford, Senior Vice President and Chief Communication Officer. “We’re a Company full of remarkable stories, thanks to the diverse group of Employees and Customers who define Southwest, so what better way to celebrate our milestone 50th Anniversary than to share some of this rich history. These one-of-a-kind stories set Southwest apart, show the Heart and Hospitality of our Employees, and will serve as the foundation for the next 50 years and beyond.”

The podcast title, “Is This Seat Open?” draws upon Southwest’s open-seating policy, which is one of the ways the Company uniquely stands out in the industry and has been in place since the airline’s founding in 1971. “Is This Seat Open?” is available on all podcast platforms, including iHeartRadio, Stitcher, Apple Podcasts, Spotify, and more. There are currently 10 episodes available, with additional episodes launching on June 15 and June 22 for a total of 20 episodes in the series.

Stories are best told by the people who experienced them firsthand, so the narratives in this podcast are vibrantly depicted by some of the People who were a part of Southwest’s iconic moments through the carrier’s 50-year history. Southwest Employees Quinnie Jenkins, a Manager in Community Outreach, and Lucas Hershberger, an Inflight Supervisor, host the podcast.

The podcast project includes a companion website, latimes.com/isthisseatopen, which features photos, archival content, videos, news clips, and write-ups for further context and information about each story.

“This podcast is about Southwest Airlines, but it’s really for anyone who flies or loves the backstory on a business succeeding against the odds,” said Allie Prater, Director of Branded Content, L.A. Times Studios. “We were honored to work with Southwest and At Will to bring forward some of the many true stories that make this airline so unique, and so beloved by its Customers.”

The podcast episodes feature moments throughout Southwest’s history, beginning with stories from the early years of the airline up to present-day, including:

Anyone can tune in to the podcast on the ground, and Southwest Customers can listen to “Is This Seat Open?” via iHeartRadio free of charge through the Inflight Entertainment Portal on their personal devices. Customers who already have the iHeartRadio app installed on their devices can play the podcast directly from the app while onboard Southwest flights.

To learn more about Southwest’s 50th Anniversary and the five-decade-long history of friendly, reliable, and low-cost air travel, visit Southwest50.com.

Due to licensing restrictions, iHeartRadio may not be available onboard WiFi-enabled international flights. The iHeartRadio product is available only on WiFi-enabled aircraft. “Is This Seat Open?” is funded by Southwest Airlines and produced by L.A. Times Studios and At Will Media. The Los Angeles Times newsroom was not involved in the production of this podcast.

L.A. Times Studios, a division of California Times, produces a variety of critically-acclaimed audio, video and live event projects. We develop projects that are grounded in editorial integrity and driven by the power of storytelling. We collaborate with a variety of partners internally and externally on both original productions and branded entertainment. The Studios group is platform-agnostic and pursues compelling narratives and conversations across a variety of media.

ABOUT AT WILL MEDIA

One of the fastest growing independently-owned podcast studios in the U.S., AT WILL MEDIA is an award-winning, full-service production company with offices in Manhattan and Los Angeles, founded in 2016 by CEO Will Malnati.  With decades of combined experience in storytelling and sound design, they set the pace for the podcast industry as a go-to partner for podcast production services and hub for successful and critically acclaimed fiction and non-fiction originals.

In its 50th year of service, Dallas-based Southwest Airlines Co. continues to differentiate itself from other air carriers with exemplary Customer Service delivered by more than 56,000 Employees to a Customer base that topped 130 million Passengers in 2019. Southwest has a robust network of point-to-point service with a strong presence across top leisure and business markets. In peak travel seasons during 2019, Southwest operated more than 4,000 weekday departures among a network of 101 destinations in the United States and 10 additional countries. In 2020, the carrier added service to Hilo, Hawaii; Cozumel, Mexico; Miami; Palm Springs, Calif.; Steamboat Springs; and Montrose (Telluride), Colo. Thus far in 2021, Southwest has initiated service to Chicago (O’Hare) and Sarasota/Bradenton both on Feb. 14; Savannah/Hilton Head and Colorado Springs both on March 11; Houston (Bush) and Santa Barbara, Calif. both on April 12; Fresno, Calif. on April 25; Destin/Fort Walton Beach on May 6; Myrtle Beach S.C. on May 23; Bozeman, Mont. on May 27; and Jackson, Miss. on June 6; and will begin service to Eugene, Ore. on Aug. 29; Bellingham, Wash. on Nov. 7; and Syracuse on Nov. 14.