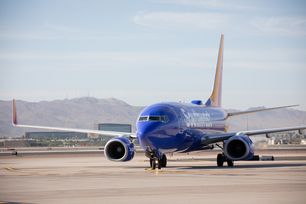 Southwest® has undertaken multiple efforts over the years to minimize its carbon footprint and the Company continues to seek opportunities to help mitigate emissions. NREL presents one of those opportunities, as Southwest intends to continue to support NREL’s work to develop low-carbon, low-cost, high-performance aviation fuels created from wet waste. Southwest plans to work with NREL to bridge a gap between the science behind SAF and the application of these sustainable fuels on a commercial level.

“We recognize the important role SAF will play in Southwest’s journey to achieve carbon neutrality by 2050—a goal we’re dedicated to reaching,” said Stacy Malphurs, Vice President of Supply Chain Management & Environmental Sustainability. “By working with organizations like NREL, Southwest embraces a great opportunity to advance the crucial science that makes this technology possible, and more available. We’re excited to work with NREL toward commercially-viable SAF.”

According to NREL, its analysis quantifies that U.S. wet waste, including food waste, could produce enough energy content to cover about 20% of U.S. jet fuel consumption. Conventional jet fuel is a primary source of greenhouse gas emissions in the aviation industry—showing the value of creating low carbon or carbon-negative SAF (on a lifecycle carbon assessment basis) from low-cost wet waste is a step toward one day reducing reliance on traditional jet fuel.

NREL has demonstrated how to make SAF from wet waste that is compatible with existing jet engines,” said NREL scientist Derek Vardon. “It has the potential for a carbon negative footprint when diverting food waste from landfills.”

As a leading global citizen, Southwest remains dedicated to doing the right thing for its People, through its Performance, and in service to the Planet. Southwest recognizes conservation can be more impactful when we all work together for a more sustainable future. For more information about Southwest’s citizenship efforts, visit southwestonereport.com.

In its 50th year of service, Dallas-based Southwest Airlines Co. continues to differentiate itself from other air carriers with exemplary Customer Service delivered by more than 56,000 Employees to a Customer base that topped 130 million Passengers in 2019. Southwest has a robust network of point-to-point service with a strong presence across top leisure and business markets. In peak travel seasons during 2019, Southwest operated more than 4,000 weekday departures among a network of 101 destinations in the United States and 10 additional countries. In 2020, the carrier added service to Hilo, Hawaii; Cozumel, Mexico; Miami; Palm Springs, Calif.; Steamboat Springs; and Montrose (Telluride/Crested Butte), Colo. Thus far in 2021, Southwest has initiated service to Chicago (O’Hare) and Sarasota/Bradenton, both on Feb. 14; Savannah/Hilton Head and Colorado Springs, both on March 11; as well as Houston (Bush) and Santa Barbara, Calif., both on April 12; and will begin service to Fresno, Calif. on April 25; Destin/Fort Walton Beach on May 6; Myrtle Beach S.C. on May 23; Bozeman, Mont. on May 27; Jackson, Miss. on June 6; and Eugene, Ore. on Aug. 29. The Company also has announced an intention to initiate new service to Bellingham, Wash., later this year.