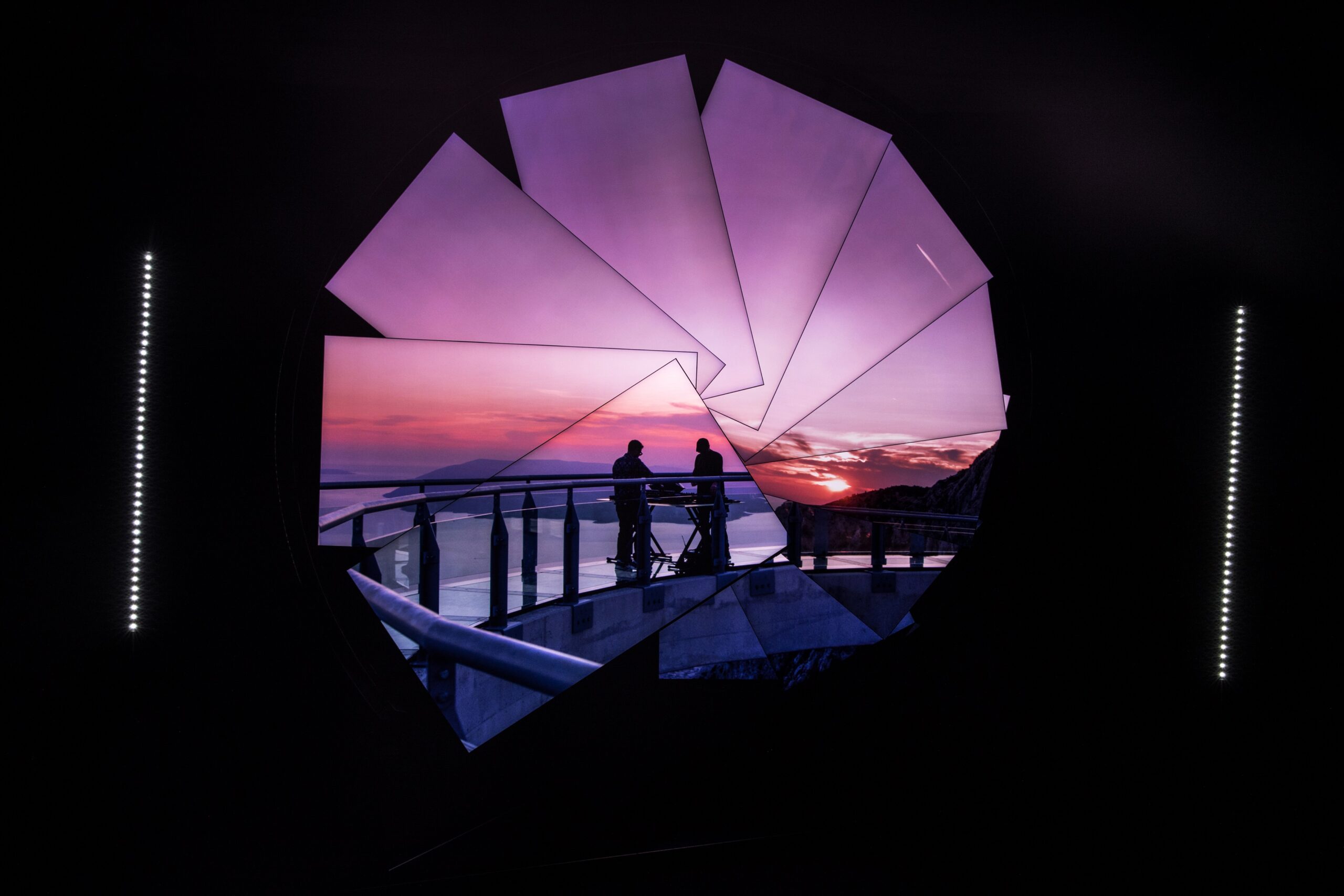 The immersive experience represents the continuation of Samsung’s commitment to celebrating the ever-moving crossroads of art and technology, with the visionary mind of Michael Murphy. On Murphy’s spiral installation, that stood almost twelve feet tall in a darkened room, audiences were teleported to Gorgon City’s exclusive performance, while Cercle’s sweeping camera and cinematography flaunted the rich landscapes of the rocky Biokovo Natural Park on Croatia’s rocky southern coast – all through the all-encompassing lens of the Neo QLED state-of-the-art 8K Infinity Screens. As Gorgon City’s set unfolded on the striking and complex architectural glass walkway, Murphy’s trademark perceptual deception revealed itself to show the nearly bezel-less, Anti-glare screens, with all eleven working in unison, spiralled to manipulate the eye.

Michael Murphy said: “I’m so proud of this installation. To think this is the first time I’ve ever worked with moving images in my art, so the challenge of integrating them onto not just one, but eleven screens – well, it looks and feels amazing. Of course, Cercle’s unbelievable cinematography and the breath-taking picture quality of the Neo QLED made my job easier, not to mention the fact they’re Samsung’s slimmest ever screens, but I’m beyond excited the installation has helped me push my art to the next level. That’s why I’m so glad Samsung and I got to work together for this piece – we’re both pushing for viewers to see the world in a new light. I do it with mind-blowing perceptual tricks, Samsung with their mind-blowing screens.”

As Croatia’s vivid blues, oranges and greens swept across the true-to-life picture and the richest, nearly bezel-less colour ever seen, audiences weren’t just transported to a set on the Adriatic coast, but thanks to Murphy’s transformational installation, to a different world entirely.

“At Samsung, we’ve always tried to push boundaries, and there is no greater boundary to cross than to experience a new and fresh perspective.” said Nathan Sheffield, Samsung’s Head of Visual Display. “That’s why we wanted to work with Michael, because his work has always transcended the boundaries between art and perception. Cercle have done the same with music, cinema and culture. At Samsung we aim to show our customers how expressive, inspiring and colourful the world can be. With Michael, Cercle and the remarkable visual power of the super Neo QLED we’ve made a big step towards our goal.”

“Just wow,” said Cercle founder, Derek Barbolla. “We’ve filmed some beautiful scenes worldwide, and we knew the Skywalk video with Gorgon City would be no exception. However, none of the performances we’ve filmed have looked just so true-to-life on screen. Then, when combined with Michael Murphy’s perceptual artistry –it reaches a whole new level. It goes to show – when you entwine music, cinema, art and the world’s best TV, you can create something truly special.”

Matt Robson-Scott of Gorgon City said: “It’s been an honour to work with the Samsung and Cercle team. It was such an amazing experience shooting in a such an epic location and we feel like it suits the track perfectly. We were blown away by the way they work and hope everyone loves the video as much as we do”.

Samsung’s new, flagship Neo QLED television, like the immersive experience, delivers a mesmerising viewing experience with true-to-life picture, rich colour and anti-glare technology in the comfort of your home. For superpowered visual technology, only available with the Neo QLED 8K TV, you can truly experience new perspectives.