Under the extension of the Programme to 31 March 2017, customers who transit through Changi Airport on SIA and/or SilkAir can redeem a Changi Dollar Voucher (CDV) valued at either $20 or $40, depending on the point of origin.

Mr Lim Ching Kiat, Changi Airport Group’s Senior Vice President for Market Development, said, “We are delighted to continue this partnership with Singapore Airlines, which has served us well in strengthening the appeal of Changi Airport as a transit hub. For our transit passengers, a host of exciting shopping, dining and leisure offerings await them at Changi. The Changi Transit Programme will make exploring our terminals even more exciting for SIA and SilkAir passengers.”

The CDVs are valid for one-time use at retail, food and service outlets in the transit and public areas of Terminals 1, 2 and 3. They may also be redeemed for one-time access to the Ambassador Transit Lounge at Terminals 2 and 3 for up to two hours. Services at the lounge include showers, light refreshments and a wide range of reading materials.

Travellers can also look forward to amenities such as airport-wide complimentary WiFi, movie theatres and themed gardens while transiting at Changi Airport, where a convenient Skytrain transport system and shuttle buses provide easy access to all three terminals.

Through the Singapore Airlines Boarding Pass Privileges Programme, SIA and SilkAir passengers can also enjoy exclusive privileges when they present their SIA or SilkAir boarding passes at participating outlets in Changi Airport.

Terms and conditions apply for the Changi Transit Programme. These can be found at:http://www.singaporeair.com/en_UK/special-offers/changi-transit-programme/.

Changi Airport is the world’s sixth busiest airport for international traffic.  It served a record 55.4 million passengers from around the globe in 2015.  More than 360 retail stores and 140 F&B outlets are situated across three terminals to cater to passengers and visitors.  With over 100 airlines providing connectivity to 320 cities worldwide, Changi Airport handles about 6,800 flights every week, or about one every 90 seconds.

Singapore Airlines is committed to operating a modern aircraft fleet, offering world-class cabin products and top quality service provided by the iconic and elegant Singapore Girl. With Singapore as its main hub, the Airline operates services to 60 destinations in 33 countries.

Singapore Airlines has more than 100 modern aircraft in its fleet, and created aviation history in October 2007 by becoming the world’s first airline to fly the largest commercial plane in the world, the Airbus A380. In July 2013, Singapore Airlines launched its next-generation cabin products in all three classes as well as the world’s most advanced in-flight entertainment system.

Singapore Airlines introduced its newest class of travel, Premium Economy Class, in August 2015, and recently took delivery of its first Airbus A350-900, in line with its commitment to fleet modernisation and expansion.

Changi Airport Group’s hotline for media enquiries, image requests and any other communication matters, round the clock. 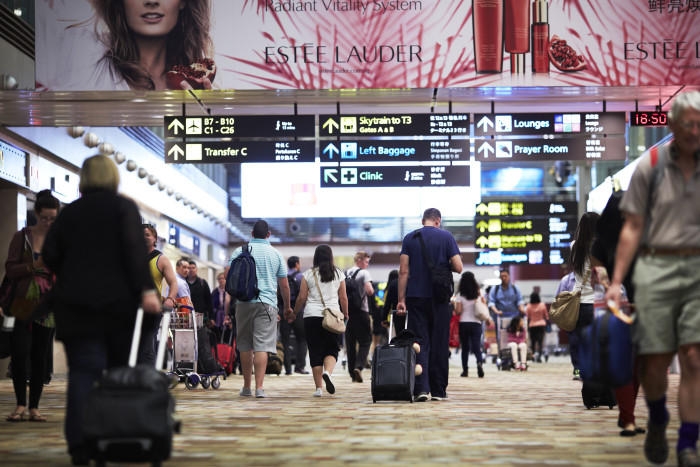