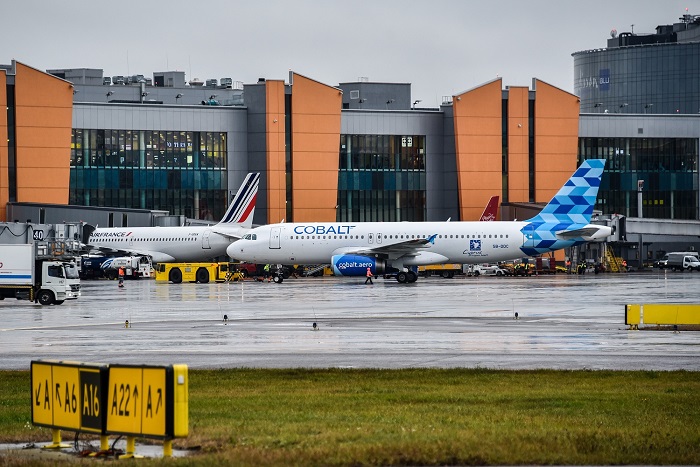 MOSCOW, Russia, 2017-Oct-31 — /Travel PR News/ — Sheremetyevo International Airport put out the red carpet for the first flight of Cobalt Air from Paphos Airport. The largest carrier of Cyprus became the first foreign airline to launch regular flights from Sheremetyevo to Paphos in the autumn-winter period.

Cobalt Air will perform flights twice a week on Thursdays and Sundays (arrival 14:25 Moscow time, departure 15:25 Moscow time) on the medium-haul Airbus A320 with a capacity of 156 seats. Passengers will be served at Terminal E.

The cheapest fare for Cobalt Air round trip is € 196. For more information on tariffs, please visit the airline’s website.

“I am delighted that Cobalt are flying today to Sheremetyevo Airport, Moscow on our inaugural flight from Paphos. Cobalt has quickly become the preferred airline of the Cypriot people; and we can’t wait to show you our great welcome and on-board service as you start your holiday or business trip from Moscow to Cyprus. I am very proud of our people too. At Cobalt we know the value of reliability, competitive pricing and genuine a focus customer care — which was recognized within the global airline community earlier this month”, said Andrew Madar, CEO of Cobalt Air.

Cyprus is a great place to visit not only in the warm season, but also in winter. Guests are offered fascinating excursions to ancient monuments, tastings wines, a restful stay in taverns on the beach with a traditional meze. In addition, the tourists are available various types of outdoor activities — winter golf, sailing and fishing, skiing in the Troodos mountains and much more.

Cobalt Air was founded in 2015 and is based in the capital of Cyprus — Larnaca. The airline’s fleet includes 6 aircraft of the Airbus A320 family with a capacity from 140 to 174 seats. Cobalt Air plans to expand the fleet with two Airbus A330s to open long-haul flights to China, South Africa and the US in 2018.

Cobalt Air successfully operates flights to 16 destinations in 10 countries. In the route network of the airline flights to cities such as London, Manchester, Glasgow, Paris, Geneva, Madrid, etc. In October this year, Cobalt Air was awarded the Start-up of the Year award from the leading CAPA — Center for Aviation (Center for Asia Pacific Aviation).

Sheremetyevo International Airport is the largest Russian airport in terms of passenger and freight traffic, takeoff and landing operations, the area of the airport complex and the capacity of the cargo complex. The Sheremetyevo route network comprises 186 destinations. In 2016, Sheremetyevo set a historic record for passenger traffic, serving 34 million 30 thousand people.

In 2016, Sheremetyevo took the first place in Europe for the quality of passenger service in the category of airports with a passenger flow of 25-40million people per year in the ASQ (Airport Service Quality) ACI (Airports Council International) rating.

According to the ACI report in the first half of 2017 Sheremetyevo became the most rapidly-growing airport in Europe in the category of airports with a passenger flow of more than 25 million per year. The growth rate of passenger traffic in Sheremetyevo amounted to 17.7%.