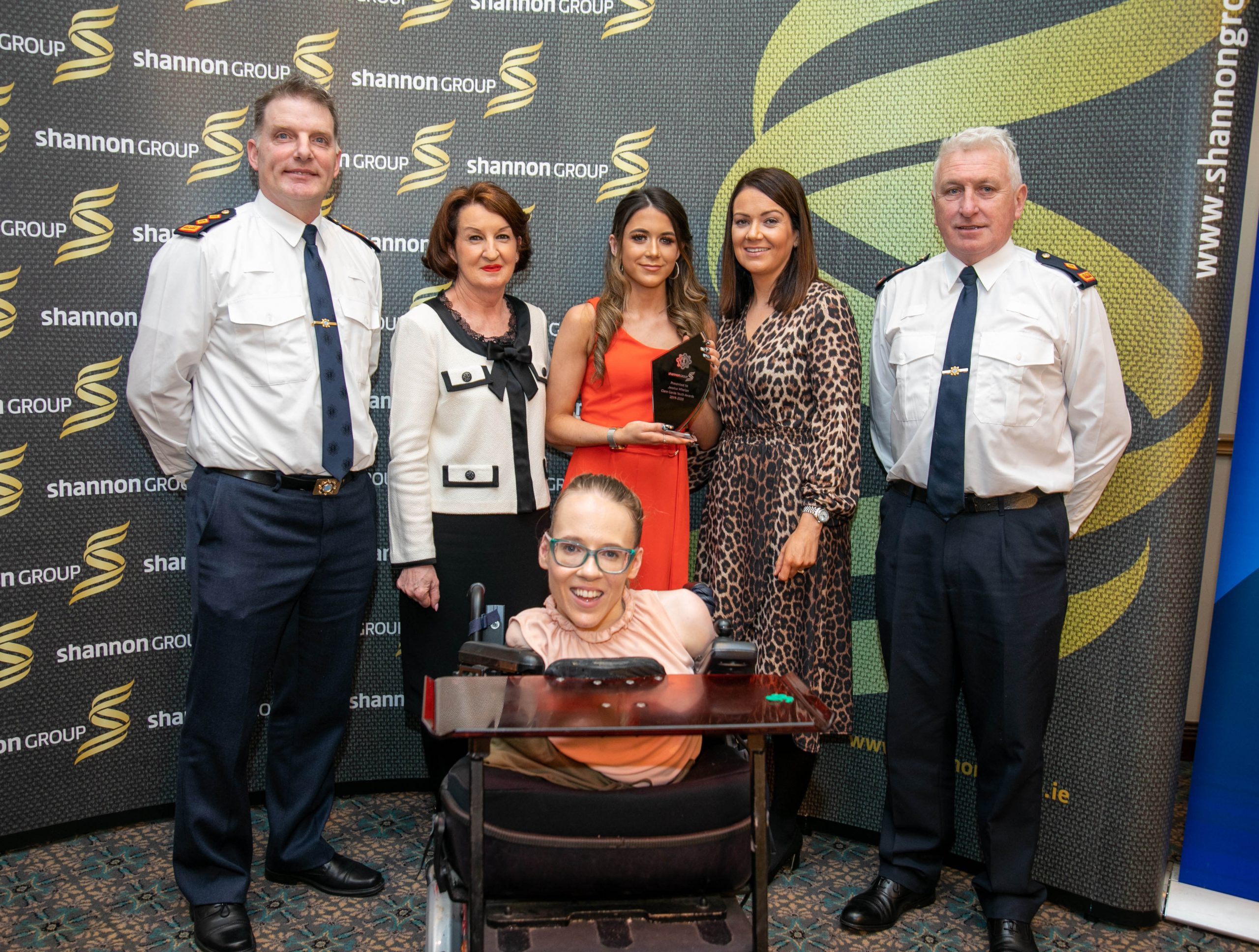 Shannon, Ireland, 2020-Feb-25 — /Travel PR News/ — County Clare’s most outstanding and courageous young, unsung heroes have been honoured at the fifth annual Shannon Group sponsored Clare Garda Divisional Youth Awards. Surrounded by proud families and friends at the special event at Woodstock Hotel, Ennis, on Saturday, the 2020 winners are all aged between 13 and 21 years.

Eight awards in all were presented at the event; three Special Achievement, two Individual, one Community Safety and two Youth Group awards, which went to young people from across County Clare who have shown outstanding leadership, resilience and community spirit.

The awards look to identify young individual, community leaders and youth groups, who have gone the extra mile with voluntary work and personal achievement.

Special guest speaker at the awards was one of Ireland’s most inspirational people, Cork woman Joanne O’Riordan, a journalist and activist. Joanne is one of just seven people living today with a condition called Tetra-Amelia syndrome, which is characterised by the absence of all four limbs.

Speaking at the Awards, Ms O’Riordan said: “I’m incredibly honoured to be the guest at the Garda Youth Awards. It’s important to recognise the incredible hard work and every day activism shown by these winners and other young people across the country. These are the leaders of the future and looking at the nominees, it’s safe to say the future is bright.”

This year’s awards attracted 36 nominations from right across the county. After a challenging selection process, the winners were chosen from an outstanding group of initial entries. Among them are young people who have demonstrated immense courage, commitment to their communities and also those who have triumphed over severe illness and enormous personal tragedies.

The winners of the Special Achievement Awards were Jade Needham from Ballina, Jessica Whelan from O’ Brien’s Bridge and Labhaoise Fitzgerald from Tulla.

The Individual Awards were won by Claudia Dempsey – Kolozsvari from Shannon, and Oonagh Ní Choileáin from Doora.

The Group Awards were won by Mullagh Youth Club, and Young SVP, St Caimin’s Community School, Shannon.  The Community Safety Award was won by Abbey Hehir, Rebecca Murphy & Ryely Cantrell from Kildysart.
Shannon Group Chairman Rose Hynes said that she felt proud of and inspired by all of the young people who took part.

“Over the last five years these awards have been a platform to showcase some of Clare’s most courageous and inspirational young leaders. Young people who have shown tremendous fortitude and strength of character, all of whom have made their families and their communities very proud. Listening to them telling their stories of achievement, how they have overcome adversity, and gone the extra mile is truly awe-inspiring.

“This is the reason Shannon Group wanted to support these awards. These inspiring young people are making a real difference in their community and the awards give us an opportunity to acknowledge that. We believe by recognising and encouraging these heroic young people we can foster in them a lifelong commitment to helping others and their communities.”

The awards programme is an initiative of the Clare Garda Division, and Chief Superintendent Sean Colleran said the purpose of the awards is to highlight the great achievements of these young people.

“The young people of today are under so much pressure to conform to Social Media norms, under pressure from their peers and society.  Frequently we hear about young people in a negative light.  The Clare Garda Youth Awards are about highlighting the positive contribution young people are making in their schools, their immediate communities and indeed nationally.

Some young people we are honouring have overcome huge personal obstacles and tragedies but yet are giving of their time, sharing their experiences with others to ensure that they are making a difference.  These inspirational young people are the future of Clare and it is important for An Garda Síochána to recognise them, what they have achieved and to share their stories with the wider community.

“It is fitting that we will have Joanne O’ Riordan with us to celebrate these brilliant young people.  To put Joanne’s achievements into context she has spoken before the United Nations in New York, was named as the Young Person of the Year at Ireland People of the Year Awards and was the youngest ever Grand Marshall at the Dublin St Patricks Festival parade.  Joanne by her actions is another example of someone who is improving communities throughout Ireland and indeed Worldwide.” he said.

“Last year 82 Divisional winners from across the country were sent forward to the National Garda Youth Awards.  The Clare Division had four nominees.  40 Divisional winners were shortlisted for judging.  19 winners were picked, from which the Clare Division received three awards.  This was a truly great result for the young people of Clare.  And indeed Clare was the only Division in the country to receive three awards.

This year we will be sending four nominees to the National Awards all of whom we believe deserve national recognition,” said Chief Superintendent Colleran.