Radisson Blu, the iconic hotel brand driven by innovation and design,  strengthens its presence in Finland with the opening of Radisson Blu  Aleksanteri Hotel, Helsinki. The newly renovated hotel has a strong connection  to the local people and culture, and promises to be every guest’s “home away  from home”.

HELSINKI, 2016-Mar-25 — /Travel PR News/ — ”We are proud to extend our long-term partnership with  SOK Corporation and add another stunning hotel to our portfolio of  award-winning hotels in the Nordic region. With Radisson Blu Aleksanteri, we look  forward to continue delighting our guests with our legendary Yes I Can! service  and the best of upper-upscale hotel experience in the Nordics”, said Tom Flanagan, Area Vice President for The  Rezidor Hotel Group in the Nordics.

Radisson Blu Aleksanteri Hotel, Helsinki is a  conversion of the existing Solo Sokos Hotel Aleksanteri, which has gone  through a thorough upgrade in the brand and guest experience standards. All 151 rooms and suites offer a high-quality, intimate, boutique hotel-experience  in the bustling city center of Helsinki.

“The new Radisson Blu Aleksanteri Hotel, Helsinki  is a perfect complement to our family of eight unique Radisson Blu Hotels in  Finland. Each of our hotels create an individual experience of the strengths of  the global Radisson Blu brand,” said Tomi  Peitsalo, the Vice President of SOK International Hotel Business and  Radisson Blu Regional Director, Finland.

Personal guest experience
Individual service has always been the backbone of  the hotel and it has now been even further enriched to meet the global trends  and customers’ expectations. To ensure first-class guest experience, the  renewal is based on a customer survey that revealed that both business and  leisure travelers are looking for genuine and warm-hearted experiences while staying  at a hotel.

The entire hotel, from guest rooms to the restaurant  echoes the authentic atmosphere of a dream and warm home. At ground level, the  hotel opens up to a unified area featuring Aleksanteri Lounge, where the hotel  guests and restaurant guests can relax, dine, work, meet friends or enjoy a  quiet moment or two, just like at home.

The design and usability features are created to  delight everyone. The Blu Dreams sleeping experience focuses on comprehensive  sleeping comfort and individual needs. One of its elements is the Magic Bed,  with an intelligent mattress, which molds individually to the person, paired  with a range of pillows and duvets to choose from.

The Aleksanteri Hotel’s breakfast features the  signature Radisson Blu’s Super Breakfast concept, which recently celebrated  World Water Day, by demonstrating the benefits of a well-thought over dining  experience that nourishes all senses and conserves water, world’s most precious  natural resource. The Super Breakfast is based on high-quality products, local specialties  and a visually stunning presentation.

The hotel operations of Radisson Blu Aleksanteri  Hotel, Helsinki will be run by Sokotel Oy, which is SOK’s subsidiary in the  travel and hospitality business.

About Radisson Blu®
Radisson Blu® is one of the world’s leading hotel brands with  nearly 300 hotels in operation in 69 countries and territories. Radisson Blu’s  vibrant, contemporary and engaging hospitality is characterized by a unique Yes  I Can!SM service philosophy, and all of its first class hotels  offer a range of signature features that are empathetic to the challenges of  modern travel, including the 100% Satisfaction Guarantee. Distinguished the  world over as the brand with Hotels Designed to Say YES!SM,  Radisson Blu offers a vivid visual celebration of leading-edge style where the  delight is in the detail. Radisson Blu hotels are located in prime locations in  major cities, airport gateways and leisure destinations across the world.

The business of the hotels is on the responsibility  of Sokotel Oy in the Helsinki region, Tampere and Oulu, and Turun Osuuskauppa  in Turku. All hotels in Finland are Green Key certificated. Sokotel Oy is SOK’s subsidiary in the travel and  hospitality business, operating seven Radisson Blu Hotels and sixteen Sokos  Hotels in Finland. Sokotel Oy has operations in the Greater Helsinki region,  Tampere, Oulu and Vaasa. Radisson Blu Marina Palace Hotel in Turku is operated  by Turun  Osuuskauppa. 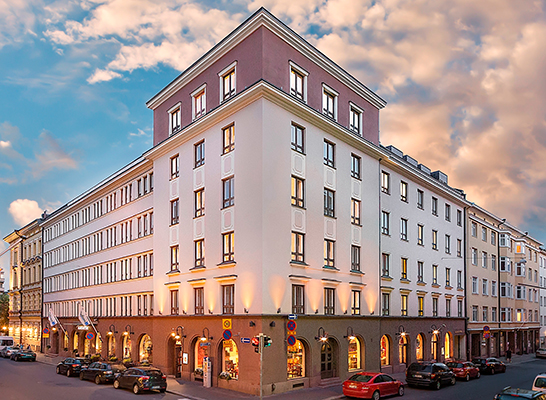